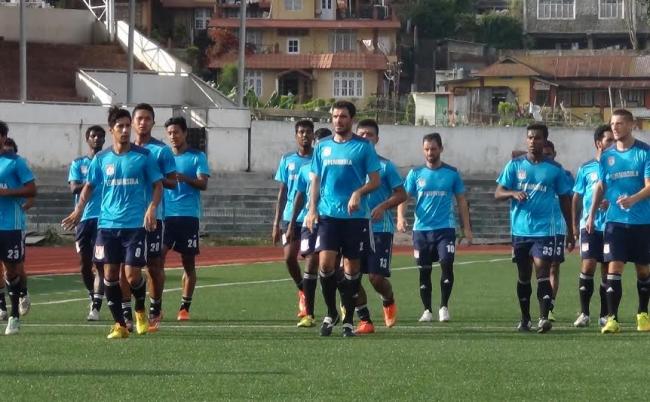 I-League: Pune FC aim for a double over Shillong Lajong

India Blooms News Service | | 23 May 2015, 06:52 pm
#Pune FC aim for a double over Shillong Lajong, # I League
Shillong, May 23 (IBNS) Pune FC will be looking to build on their impressive form when they take on Shillong Lajong FC in an I-League Round-21 encounter at the Jawaharlal Nehru Stadium in Shillong on Sunday.

The penultimate game of the season will be a crucial one for both sides for similar reasons. While fifth-placed Pune FC (26 pts) will aim to make a move up the table, eighth-placed Shillong Lajong (20 pts) look to steer clear from the relegation zone with just two points separating them and the bottom three sides.

This will also be the third time both sides face off in the 2014-15 season after clashes in the Federation Cup (December) and the I-League (January). With Pune FC emerging victorious on both occasions, they will be keen to maintain the one hundred per cent record.

Furthermore, a win over their north-east rivals on the morrow will also help Pune FC to their first double in the I-League this season, something they will be eager to achieve.

Meanwhile, Pune FC will be confident going into the clash after their morale-boosting 2-1 win over East Bengal in the previous round. However, the game against relegation threatened Lajong won’t be an easy one and Asst. Coach Gift Raikhan wants his side to be cautious.

Speaking ahead of the game, Coach Raikhan said, “It will be an interesting game. Lajong is a strong side and playing at home is an advantage for them. But we cannot take anything for granted and have to work hard. The win against East Bengal gives us a lot of confidence but we need to stay calm and approach the game in a positive manner.”

Post their victory over East Bengal on Sunday, Pune FC stayed back in Kolkata for couple of days before travelling to Shillong where they had a couple more sessions.

While the same 18-member team has travelled to Shillong, midfielder Edgar Marcelino will be a doubt having been stretchered off in the previous game. Nonetheless, he has been working hard to get back into action, but a decision will only be made on the matchday.

On the other hand, Lajong come into the game on the back of mixed results in last three games at home. A 1-1 draw against Bengaluru FC was followed by a 3-1 win over Bharat FC before they went down 1-2 to Sporting Goa in the previous game.

Nonetheless, Lajong will bank on home advantage as they will be playing their sixth consecutive game at the Nehru Stadium. The north-east side will be heavily dependent on top-scorer and Trinidad and Tobago striker Cornell Glen (13 goals) along with Brazilian attacker Uilliams Souza (7 goals). The duo has contributed 20 out of 29 goals this season and will prove a challenge for the Pune FC backline led by Luciano Sabrosa and Zohmingliana Ralte.

Meanwhile, the likes of Penn Orji, Minchol Son, Aiborlang Khongjee and Durga Boro will add to the experience in the team.

The last time both sides faced off, Pune FC recorded a massive 5-2 win, their biggest of the season so far. Back then, a Thongkhosiem Haokip hattrick and goals from Ryuji Sueoka and Darko Nikac saw Pune FC strike five times in the first half itself. The same strike force will now hope to repeat the performance against the defense which has conceded the most number of goals in the league.

Over the years, both sides have faced off thirteen times and share three wins each. Moreover, in four games in Shillong both sides have logged a win each while drawing two. Thus a win on the morrow is important and will give Pune FC an upper hand in the overall record.