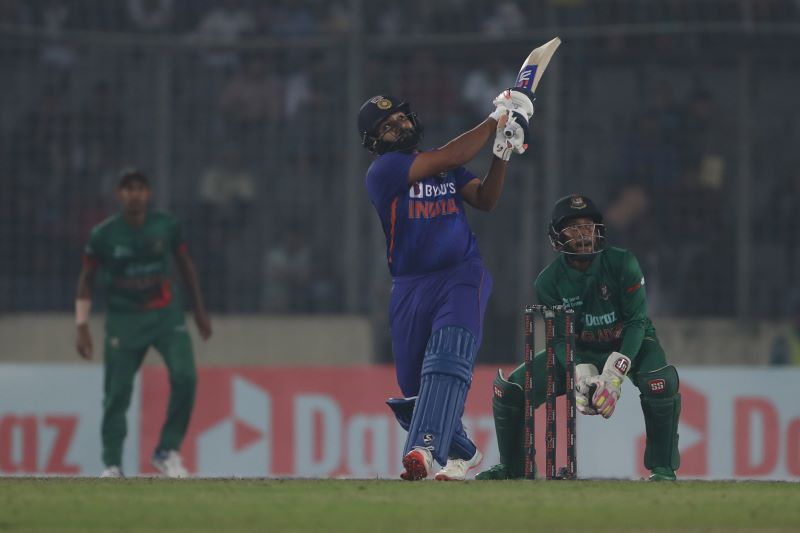 Dhaka/UNI: An injured Rohit Sharma tried his best at the end by launching into an array of shots but fell short off one big blow from India squaring the three-match ODI series against Bangladesh at Sher-e-Bangla National Stadium here on Wednesday.

Needing 20 off the final over off Mustafizur Rahman, Rohit managed to reduce the gap to six off the last ball, but the left arm fast bowler hurled a full-length ball to give no room for the Indian captain to hoick it for a six.

An unbeaten 51 off 28, containing 5 sixes and 3 boundaries, by Rohit suffering from a thumb injury, was not enough and Bangladesh took an unassailable 2-0 lead in the three-match ODI series.

Opting to bat first, Bangladesh put up a fighting total of 271/7 after they were staring at an inevitable defeat, managing only 69/6 in 19 overs.

Shreyas Iyer and Axar Patel were impressive earlier in the chase after India were reduced to 65/4 in 18.3 overs. They put on 107 runs for the fifth wicket partnership.

Bangladesh's bowlers were bang on and struck when the situation demanded to seal the series in their favour.

All the bowlers did their part, but Ebadot Hossain (3/45) and Shakib Al Hasan (2/39) were pick of the bowlers, with Mehidy Hasan Mirza also picking up two crucial wickets to add to this superlative ton early in the day.

This was an incredible series win for Bangladesh, their second successive one at home against India, seven years apart, and haven't lost a home ODI series since October 2016

Earlier, Mehidy scored 100 off 83 balls with 8 boundaries and 4 sixes, while Mahmudullah hammered 77 off 96 balls with seven hits to the fence. Both stitched a superb 148 runs for 7th wicket after Bangladesh were rattled by Mohammad Siraj and Washinton Sundar.

Siraj picked up Anamul Haque (11) and Litton Das' (7) wickets and then Sundar put the hosts on the mat with three wickets of Shakib Al Hasan (8), Mushfiqur Rahim (12) and Afif Hossain (0).

Umran Malik (2/58) also chipped in with a wicket of Najmul Hossain Shanto for 21.

Mahmudullah appeared to be scratchy, but played a very important role in the company of Mehidy, who raised their bars and brought Bangladesh on track.

As many as 68 runs came off their blazing bats in the last 5 overs, with Mehidy going on a rampage, also aided by a cameo from Nasum Ahmed 18 no off 11) who smashed 2 boundaries and a six.

Bangladesh captain Das had opted to bat after winning the toss.