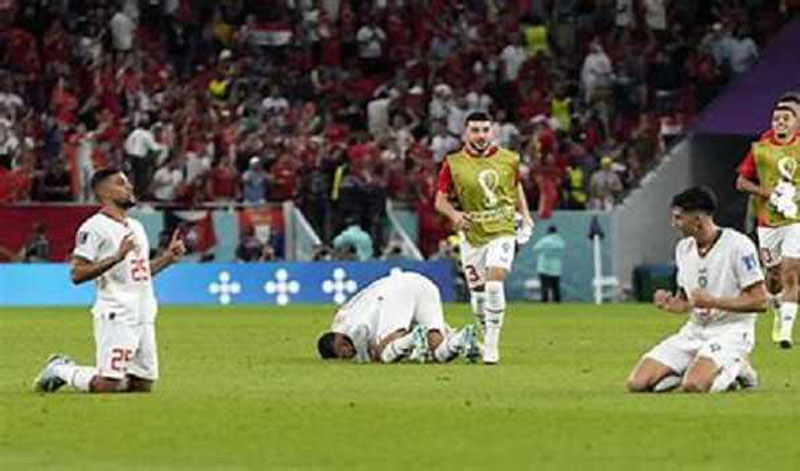 Doha: Morocco pulled off another World Cup upset on Sunday as the African side snatched their first victory in 24 years at the tournament with a 2-0 win over Belgium.

Morocco's last World Cup triumph came in 1998 by routing Scotland 3-0, which capped the Scots' last appearance in the tournament.

This is only Morocco's third win in World Cup history with the first came in 1986 by beating Portugal 3-1.

Morocco broke the deadlock in the 73rd minute, as Serie A outfit Sampdoria's midfielder Abdelhamid Sabiri curled a wide free-kick just minutes after he was pitched on, and Belgian goalkeeper Thibaut Courtois was put off by Moroccan defender Romain Saiss and could only palm the ball into the net. The FIFA later listed Saiss as the scorer.

It seemed much like a mistake from Courtois, whose positioning was questioned.

Zakaria Aboukhlal, also a substitute in the game, sealed the glorious victory for Morocco in the 92nd minute. Munir El Kajoui's long goal kick was headed back towards his own goal by Belgian defender. Chelsea winger Hakim Ziyech seized upon the loose ball, swerved away from Timothy Castagne and cut the ball towards Aboukhlal at the near post as Ligue 1 club Toulouse forward clipped the ball into the roof of the net.

Morocco are top of Group F with four points ahead of Belgium prior to the late group fixture between Canada and Croatia.

There was a whiff of sterile domination about Belgium's start to the game as they had over 70 percent of the ball possession, but Michy Batshuayi's chance is their only shot at goal through the first 20 minutes.

A cute, training ground free kick from Belgium ended with Kevin De Bruyne hitting a low shot from 25 yards that was blocked in the 16th minute.

One minute later, Amadou Onana beat Moroccan goalie El Kajoui to an inswing corner, but the Everton midfielder headed the ball high over the bar.

Onana was booked in the 29th minute for leading with the elbow against Azzedine Ounahi. He will miss Belgium's final group game against Croatia.

Morocco's goal in additional time of the first half from Ziyech's free kick at the right of box was ruled out for offside after the VAR check.

Saiss was in an offside position and his presence was one of the main reasons Courtois fumbled Ziyech's free kick into the net.

Morocco's best opportunity in the first half came in the 35th minute as Achraf Hakimi ran onto to a lofted pass down the inside-right channel, away from Thorgan Hazard. He moved into the area, realized he had little support and spanked a half-volley high and wide of the near post.

The game was livening up for Morocco in the second half. Sofiane Boufal controled Ziyech's cross-field pass on chest, shimmied away from Thomas Meunier on the left edge of the area and shaped a curling shot that bounced just wide of the far post in the 56th minute.

Belgium had a double substitution in 60th minute with Youri Tielemans and Dries Mertens replacing Amadou Onana and the ineffective Eden Hazard respectively, but that would not change the awkward situation through the second half for the Red Devils, which were listed in second place in FIFA world rankings.

Morocco will meet Canada and Belgium are to take on Croatia on Thursday in the last group fixture.