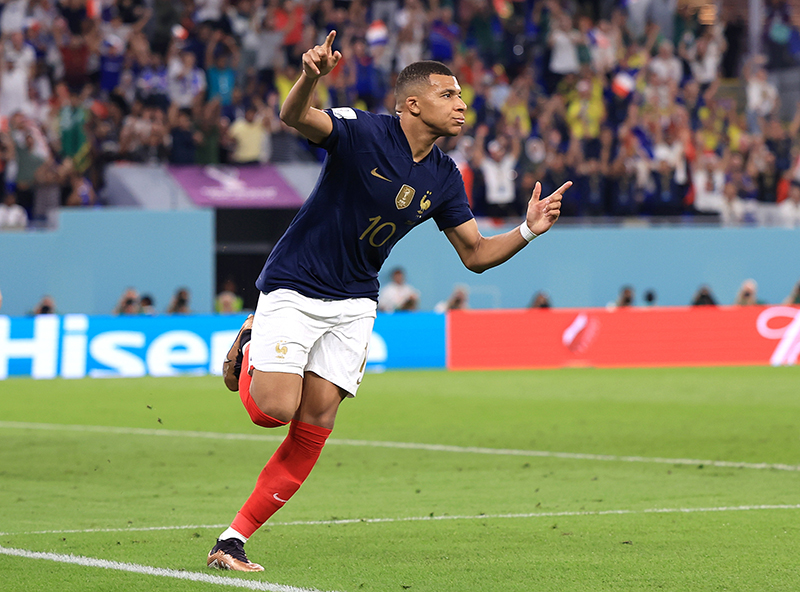 Doha/UNI: Kylian Mbappe scored twice as France booked their place in the last 16 of the FIFA World Cup with a 2-1 win over a combative Denmark on Saturday.

The striker netted an 86th-minute winner, his 14th in the last 12 games for France, bundling home with his midriff at the far post after a curling cross from Antoine Griezmann.

He had a 61st-minute goal, with his shot from a neat pullback from Theo Hernandez taking a slight deflection from Andreas Christensen on its way past Danish keeper Kaspar Schmeichel.

Christensen equalized with a powerful header that Joaquim Andersen flicked on from a corner in the 68th minute, but Denmark couldn't hold on for what would have been a creditable draw.

France coach Didier Deschamps made three changes to the defense that started against Australia, with Raphael Varane and Jules Kounde stepping into central defense, while Theo Hernandez replaced his injured brother Lucas on the left.

Denmark must have been confident at the start after beating France twice earlier this year in the UEFA Nations League, and coach Kasper Hjulmand made a big call by leaving Simon Kjaer on the bench.

France soon began to get the upper hand against their rivals who were playing a flexible five in defence and an organized line of four in front of them.

Christensen was maybe a bit lucky only to be shown a yellow card in the 19th minute for bringing down Mbappe. TV replays showed that he wasn't the last defender by centimetres, but without his foul, Mbappe would have probably sprinted clear on goal.

From the resulting free kick, Griezmann passed to Ousmane Dembele, and from his cross Adrien Rabiot forced a flying save from Kasper Schmeichel.

Dembele was France's biggest threat and Mbappe should have done better than fire another good cross from the winger into the stands with five minutes left in the first half.

Hjulmand replaced Cornelius with Martin Braithwaite for the second half and he helped Eriksen by offering a more mobile outlet for his silky passes.

Schmeichel stood tall to deny Mbappe after a surging run from the striker ended with an effort that was too close to the keeper, and Griezmann then fired over after his first touch took him past Rasmus Kristensen.

A goal was coming and it arrived in the 61st minute: Mbappe was given too much space on the France left and he flicked the ball to the onrushing Hernandez to pull the ball back.

Mbappe's contact wasn't clear, but it got just enough of a deflection off Christensen to take it past the unsighted Schmeichel.

Christensen atoned in the 68th minute with a powerful header to equalize after a great flick from Andersen following a corner and five minutes later, Hugo Lloris had to make a sharp save to deny Jesper Lindstrom.

As time ticked away, Kounde and Rabiot went close for France, while Braithwaite's shot was inches wide of Lloris' post at the other end. But in the end it was Mbappe that had the last word.

Denmark now need to beat Australia in their last Group D game to have a chance of getting into the knockout stage.