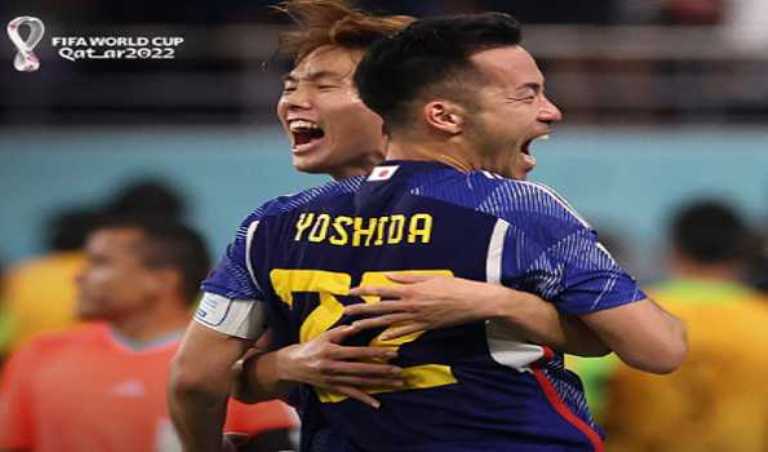 Doha/UNI: Japan stunned Germany 2-1 with the help of players, who earn their living in the German Bundesliga, in the FIFA World Cup on Wednesday, throwing Group E into disarray.

Wednesday's stunner comes a little over 24 hours after Saudi Arabia had dealt a hammer blow to Argentina 2-1 to give this World Cup its first giant killing.

For Japan, this is one of the biggest victories in their World Cup history, and their coach Hajime Moriyasu and his strikers deserve all the credit.

Moriyasu brought on Ritsu Doan and Takuma Asano, and they delivered to shake the 2014 world champions. The coach pretty well knew if his side kept the pressure on the Germans, he could propel his side to get something at least, but he got more than expected.

Japan made the most of the game by picking up holes in Germany's defense, and did not fail to pierce through them relentlessly, which the losing side could not plug.

Dona and Takuma, in the 75th and 83rd minutes etched their names in the history books, in a game where Japan only had three shots on target and two of them bulged the net.

Japan came in with high ambition and from the word go it was apparent from their game as they thought they had an early lead when Germany were on a stroll.

Daichi Kamada robbed Germany's Ilkay Gundogan in the centre-field to break down the right flank, and crossed it over to the far post for Daizen Maeda who slif home, but was a yard offside.

This served to spike the adrenaline of the Germans, especially Gundogan a little bit.

He was denied twice, once by goalkeeper Shuichi Gonda and once by Southampton defender Maya Yoshida before he was given a chance from the penalty spot by goalkeeper Gonda who fouled the German twice as he dragged him to the ground.

Germany put the pressure on the game with 15 minutes remaining and had they been a little more precise with some of their finishing they would have won the game.

This was Germany's consecutive loss in the opening game of the group stage in the last two world cups.