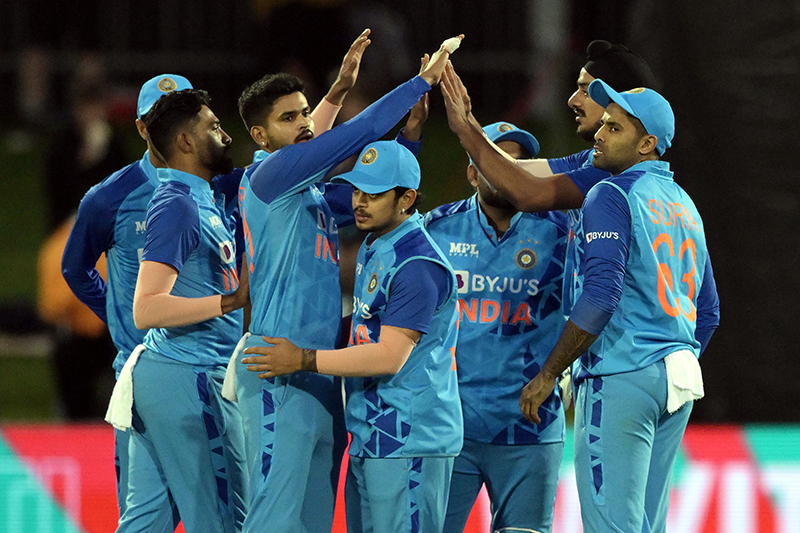 Napier/UNI: Stand-in captain Hardik Pandya's blistering knock helped India to win the three-match series against New Zealand after the rain-hit third T20I ended in a tie as per DLS method at McClean Park here on Tuesday.

India had drubbed New Zealand in the second match by 65 runs in Mount Maunganui after the first match was called off in Wellington due to incessant rains.

Asked to bowl first, Indiana pacers Mohammad Siraj (4/17) and Arshdeep Singh (4/37) pulled India back by bagging four wickets in as many runs after Devon Conway and Glenn Phillips made merry by belting half centuries.

The Black Caps were perched comfortably when Conway (59 off 49) and Phillips (54 off 33) were going great guns, but once they marched back to the dugout, the New Zealand batting fell like a pack of cards to Siraj and Arshdeep extravagance.

According to DLS, 76 would have been the winning score after 9 overs but they were 75, the par score, and hence the game ended in a tie.

Early on, Arshdeep provided the first breakthrough, packing off Finn Allen for 3 in the second over of the innings.

Conway and Mark Chapman steadied the ship before Siraj wrung one into Chapman who fell for 12, leaving New Zealand at 44-2 after 5.2 overs.

Conway and Phillips, put their feet on the crease and rebuilt the New Zealand innings. The former brought his half-century in 39 balls, while Phillips was rusty but managed to get some lusty blows to give hosts the needed push.

Both orchestrated a crucial partnership of 86 runs for the third wicket, before Siraj broke it in the 16th over. Thereafter, the march-past of the Kiwi batsmen began.