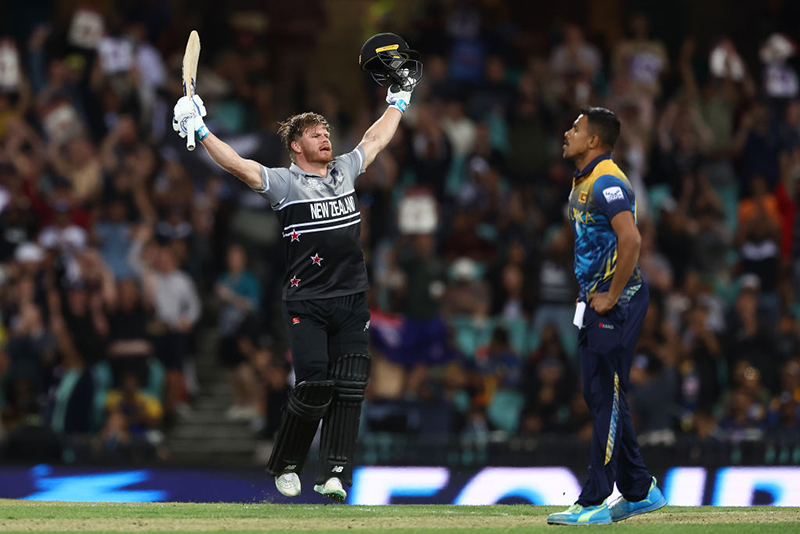 A century by Glenn Phillips and four wickets by premier Kiwi fast bowler Trent Boult powered New Zealand to outplay Sri Lanka by 65 runs in a Group 1 match of the T20 World Cup at Sydney Cricket Ground in Sydney Saturday.

Winning the toss and electing to bat first, New Zealand found themselves in trouble straightaway as Kane Williamson-led team were reduced to 15/3 in four overs.

Phillips then partnered Daryl Mitchell to avert a batting slide, stitching a 84-run partnership for the fourth wicket.

Surviving two dismissal chances at 12 and 45, Phillips went on to slam 104 off 64 balls, courtesy 10 fours and four sixes.

In reply, Sri Lanka faced batting collapse losing half of their side in just 6.1 overs.

Skipper Dasun Shanaka's 35 and Bhanuka Rajapaksa's 34 were not enough to save the sinking ship as New Zealand wrapped up Sri Lanka for 102 in 19.2 overs.

With the win, New Zealand kept themselves alive in the race to the semi finals as they would look to defeat England next to advance in the tournament.

Sri Lanka, who have a thin chance to progress after the group league matches, will now have to win their remaining matches and wait for other results to go in their favour.