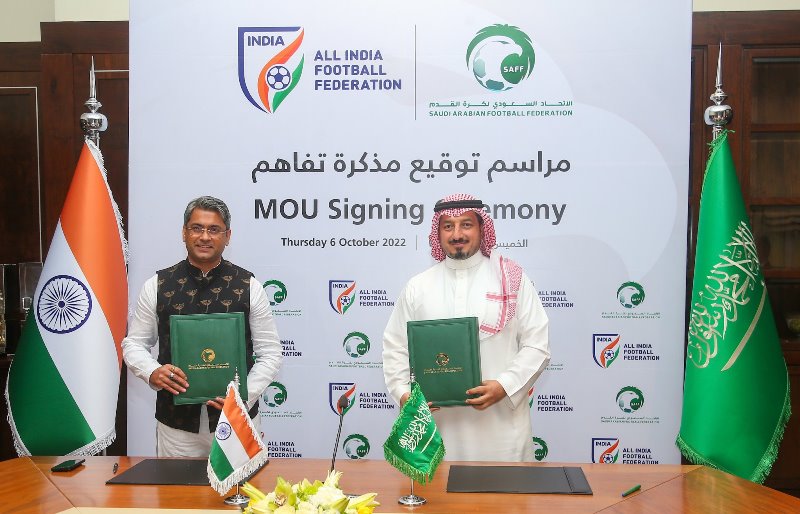 Dammam/UNI: The All India Football Federation (AIFF) has signed a Memorandum of Understanding (MoU) with the Saudi Arabian Football Federation (SAFF) for promotion of football activities including the provision of technological support, the organisation and hosting of youth competitions for both men and women on a regular basis.

" The agreement will allow a wide range of activities, including the provision of technological support, the organization and hosting of youth competitions for both men and women on a regular basis, as well as exchange of football and governance experts.

"Both federations also agreed to deeply study the possibility of staging the final stages of the National Football Championships (NFC) for the Santosh Trophy in Saudi Arabia next February 2023," the statement added.

The idea is to host the knockout phase of Santosh Trophy in select cities of Saudi to encourage State level players to dream big and also to connect the large Indian community in Saudi with Indian football and create a win-win situation for both the Federations, Chaubey said.

The agreement comes as part of the efforts of SAFF and AIFF not only to enhance cooperation among key strategic partners in Asia, but also to offer the opportunity to consolidate stronger bonds through football and culture between the large Indian Communities based in Saudi Arabia and Indian football.

The SAFF President wished AIFF the best of success for the upcoming organization of the FIFA U17 Women’s World Cup as both delegations look forward to an action-oriented cooperation.

“It is a remarkable development for Indian football. Our aim is to create a new platform for Indian football and spread it among the Indian fans all across the world. My sincere thank to SAFF for their active cooperation in realising our goal.” Chaubey said.

Prabhakaran said, “It is an out of the box idea that I am sure will help Indian football to create a niche for itself among its loyal fans, who eagerly follow Indian football from wherever they are.

"Our aim is to take Indian football forward and explore all possibilities. This move, we are confident, will inspire players from across the nation to showcase their performance in front of a bigger audience.”