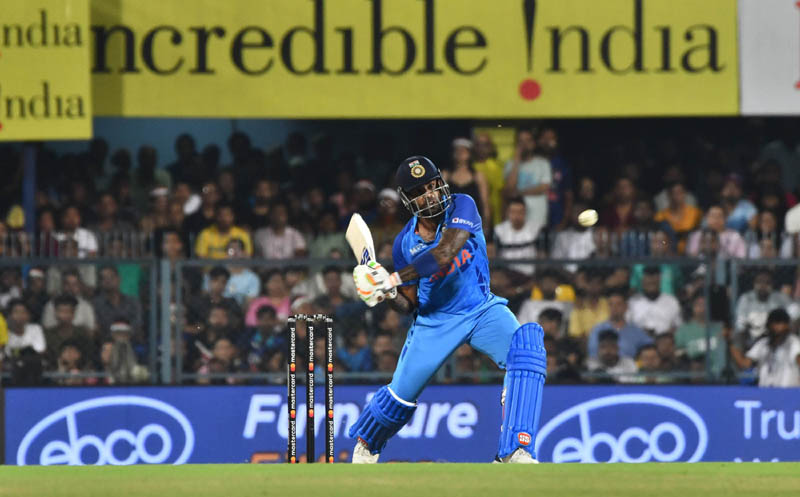 Sent into bat by SA Captain Temba Bavuma, India posted a gigantic 237/3 which always looked out of reach of the Proteas after they lost wickets early on.

In reply, the visitors could manage 221/3, despite a century by David Miller, who hammered 106 not out off 47 balls, which was decorated with 8 boundaries and 7 sixes.

Quinton de Kock, who struggled to time the ball, made 69 not out off 48 balls with 3 boundaries and 4 sixes.

In a high-scoring game, bowlers of both sides were hammered all round the arc, except Deepak Chahar and Keshav Maharaj were exceptional with the later bagging 2 wickets for 23 runs and the former giving away 24 runs.

Suryakumar Yadav (SKY) was in sublime form as he cracked his third consecutive half-century, one against Australia and two against South Africa.

Taking charge soon after the openers departed, Suryakumar spanked the lousy-looking bowlers all round the park to become the third-fastest Indian batsman to score a half-century. It just took 18 balls to get to his fifty with a huge six off Wayne Parnell in the 17th over of the match.

Yuvraj Singh is the first-fastest half-century maker who did it in 12 balls and Gautam Gambhir is second and fourth fastest, facing 18 and 19 balls, respectively.

The fiery Indian batsman smashed 5 boundaries and as many sixes en route to his smoldering knock, hitting 61 off just 22 balls before being run out by South Africa captain Temba Bavuma.

Suryakumar also reached yet another milestone in his innings as he also became the third-fastest Indian to reach 1000 runs in T20Is by doing it in his 31st innings, remaining only behind Virat Kohli (27 innings) and KL Rahul (29).

Earlier, Opener Rahul was lucky to get a boundary after an inner edge missed his stumps behind the stumps, but continued the blitzkrieg with shots around the park. He, along with his Captain Rohit Sharma (43) gave India a superb start after Bavuma sent India into bat after winning the toss.

Kohli also made merry in the company of Suryakumar as they sewed up the fastest 100 plus partnership. They stitched 102 runs partnership in 42 balls, eclipsing the previous best of 107 off 49 balls made by Mahindra Singh Dhoni and Rahul against West Indies at Lauderhill in 2016.

The former Indian captain became the first India to complete 11,000 runs in T20 history. He reached this milestone with a six off Wayne Parnell, scoring his 19th run in his 354th match.

Miller just kept swinging, kept connecting them off the middle, but it was all too little against the heap of runs India amassed.