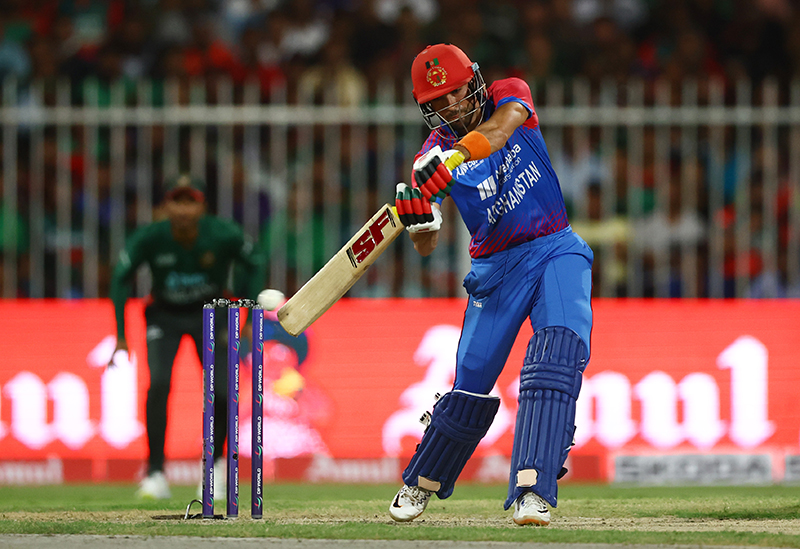 Najibullah Zadran delivered the barrage of sixes just when it mattered in his extravagant unbeaten 43 off just 17 balls, in which there were 6 towering sixes and a boundary.

Ibrahim Zadran played the anchor's role, making an unconquered 42 off 41, which was decorated by four boundaries.

Bangladesh deserves some credit as they made a game out of the paltry 127/7 total they posted.

They bowled decently well as they rankled the nerves of Afghanistan at the half-way stage.

Apart from batting, Afghanistan also dominated Bangladesh innings, with spin duo Mujeebur-Rahman and Rashid Khan, coming to the party in the powerplay and middle-overs respectively.

Both utilised the grip and turn the deck was providing to them, which made Bangladesh batsmen struggle to push for some quick runs.

Things could have been embarrassing for Bangladesh, as at one stage it appeared that they would fold for under 100 runs, but Mosaddek Hossain S 31-ball 48 and Mehidy Hasan's 12-ball 14 brought their innings on track.

Earlier, Bangladesh lost four quick wickets after putting up just 28 runs on board. Mujeeb scalped the first three wickets of Mohammad Naim (6), Anamul Haaque (5) and Shakib Al Hasan (11). The fourth wicket was taken by Rashid by sending Mushfiqur Rahim for 1.

Afif Hossain (12) was trapped LBW by Rashid, giving him his second wicket.

Mahmudulla became his third victim after he scored 25 off 27 balls. Mehdi Hasan (14) was unfortunately run out of Gurbaz/Azmatullah combination.

All said and done, Group B in the Asia Cup has a simple equation now.

The winner of Bangladesh and Sri Lanka will go through to the Super 4 round.