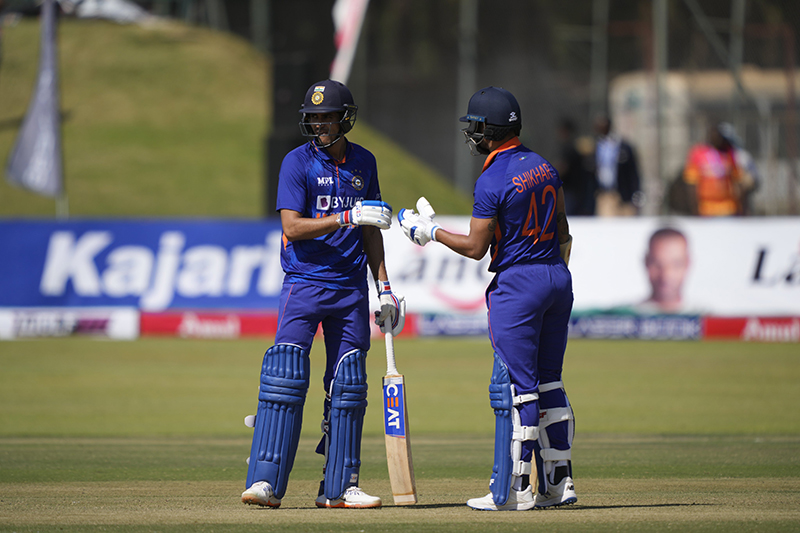 India now have 13 consecutive ODI wins against Zimbabwe – their most against a single opponent.

Deepak Chahar was adjudged Player of the Match for his figure of 3/27.

With a modest 190-run target to chase, India started off with a bang signaling their intent from the first delivery.

Both Dhawan and Gill were careful in their approach but saw off the bad deliveries with ease.

Zimbabwe's bad run in the field helped the visitors, with Dhawan being dropped on 32. Gill soon joined the party smashing three fours off Brad Evans in one over to push India further. Both batters brought up their respective fifties.

With the milestones under their belts, the two openers broke free, scoring runs at a faster tempo. They scaled the target with all 10 wickets in hand and 19.1 overs to spare.

Earlier, putting Zimbabwe in to bat first, the Indian pacers were aiming to exploit any movement the pitch had to offer in the morning. Tadiwanashe Marumani and Innocent Kaia had a circumspect start, with both Chahar and Mohammad Siraj extracting some extravagant movement.

After surviving some close calls, India finally had a breakthrough, with Deepak Chahar dismissing Kaia (4) courtesy a short delivery.

Marumani (8) was Chahar's next victim and Sean Williams (1) could not last long, with Siraj sending him packing for 1.

Chahar got his third, with some late swing trapping Wesley Madhevere's plumb in front of the stumps, reducing Zimbabwe to 31/4.

The wickets continued to tumble for Zimbabwe as Axar Patel and Prasidh Krishna joined in on the act. Both scalped two wickets apiece, reducing Zimbabwe to 110/8, with the lower middle-order failing to contribute much.

But Evans and Ngarava embarked on some late rearguard action, helping the hosts save their blushes. The pair saw their partnership last 65 deliveries, aggregating 70 runs, which took Zimbabwe close to a total of 200.

Ngarava scored 34 off 42 deliveries, smashing 3 fours and 1 six, before he was bowled by Krishna. Evans remained unbeaten on 33, also hitting 3 boundaries and a maximum.

Zimbabwe's innings came to an end when Axar dismissed Victor Nyauchi for 8, with the hosts putting up a total of 189 on the board.

For India, Chahar, Krishna and Axar picked up three wickets apiece while Siraj got one.