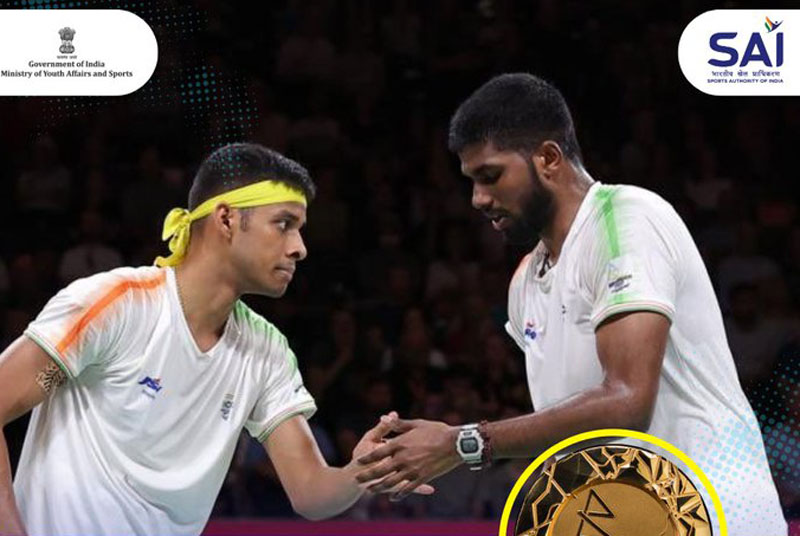 Birmingham: India's star badminton duo of Satwiksairaj Rankireddy and Chirag Shetty on Monday clinched the maiden men's doubles title at the Commonwealth Games and completed the hat-trick of gold on the final day of the quadrennial event.

Four years after being denied the title by England’s Marcus Ellis and Chris Langridge at Gold Coast, Satwik and Chirag defeated another English pair of Ben Lane and Sean Vendy in straight games 21-15, 21-13 to win India's first-ever CWG medal in men's doubles.

The match got off to an intriguing start as the momentum kept shifting between the two sides and it was the Indians who held a narrow one-point lead heading onto the break.

Post break, Chirag stepped up and took control of the net, which swung the flow in the Indian’s favour and helped them take the first game with utmost ease.

With a 1-0 lead in the match, the Indian duo took a more adventurous approach in the second game but the home team kept fighting it out and didn't let Chirag and Satwik break away with ease.

The Indians, though, managed to keep up the pace and earned flurry of points after the mid-game interval and raced to 16-11 advantage, putting them firmly on the driver’s seat. It was smooth sailing from there on as Indians wrapped up the historic win easily.

The two sides head on to gold medal match with tied 1-1 head-to-head records which the Indian extended to 2-1.

Their first meeting was at Denmark Challenge in 2019 where the Sean and Vendy emerged victorious. Chirag and Satwik had dispatched the English pair with ease in their most recent meeting at the Tokyo Olympics.