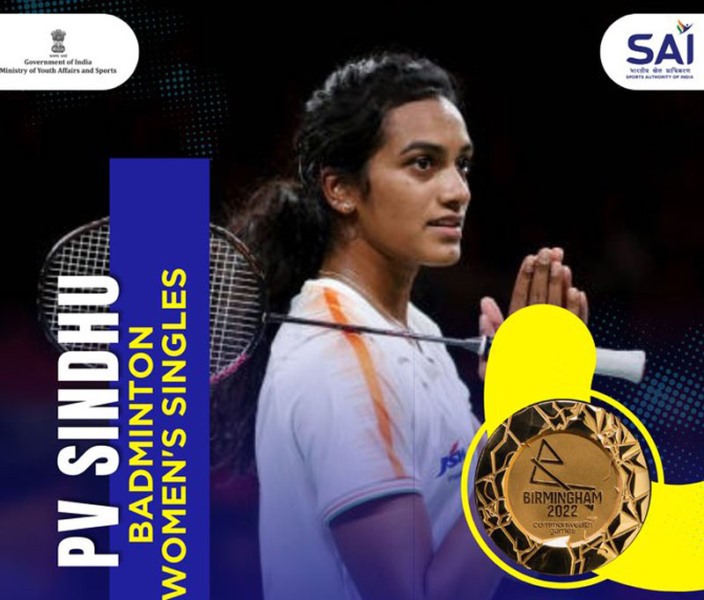 Sindhu lost to Saina Nehwal in the final at Gold Coast in 2018 to settle for silver.

The Indian ace has emerged victorious on eight of the 10 occasions she has gone up against Michelle Li.

The Canadian player's last win against Sindhu was the women's singles semifinal at the 2014 CWG.

Post that loss, Sindhu has defeated Michelle in sixth-consecutive matches including a win in the 2016 Olympics group stage fixture and the 2018 CWG semifinal.

Playing with the strap on her left leg Sindhu was stiffer in movements and looked to play shorter rallies against the world No. 13 Michelle.

Sindhu relied heavily on the mix of cross-court drop shots and smashes to go into the break leading 11-8. The Indian ace then built on it post interval to take the opening game.

While the Indian shuttler remained focused and continued making pinpoint returns, the Canadian made various unforced errors and failed to squeeze longer rallies out of Sindhu.

However, a 57-stroke rally won by Michelle Li when Sindhu was leading 13-9, turned the momentum towards the Canadian shuttler for a brief time.

The former world champion regrouped quickly to snatch back the initiative and complete the set of medals at the Commonwealth Games. It was PV Sindhu’s third win over Michelle Li this year and ninth overall in the 11th meeting.