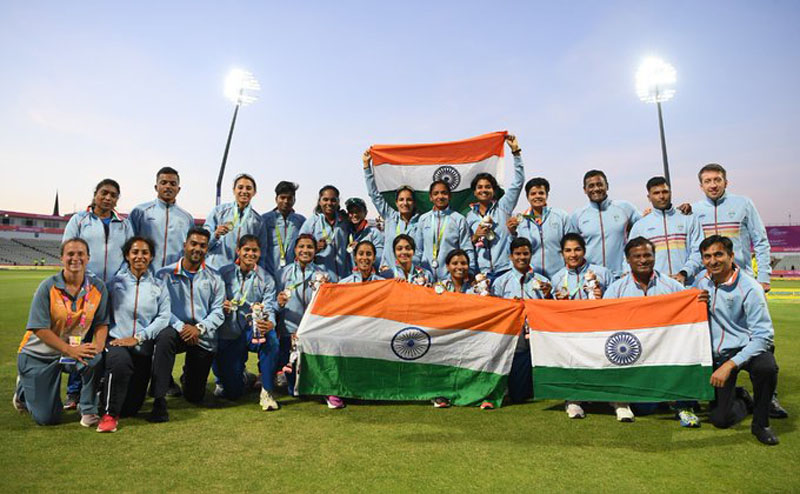 India defeated by 9 runs in CWG final against Australia, settle for silver

Birmingham: A billion hearts broke as India failed to grab yet another gold medal after they lost in the women's CWG T20 finals to Australia, who clinched the medal rush by 9 runs here on Sunday.

India did everything a good script would have. They fielded well, batted their way through and kept hopes of billions of Indians alive until the finish, but Australia capitalised on their mental fortitude and skillful traits.

Australia never panicked even when Jemimah Rodrigues and Harmanpreet Kaur's stand threatened to snatch gold from their grip. They inflicted the Indian chase by picking up wickets at regular intervals, defending a pretty par total on the board.

Megan Schutt (2-27) gave them the breakthrough and Ash Gardner (3-16) struck twice in the following over. Despite the odd boundaries and asking rate always under check, it was only a matter of time for the Australian bowlers to run through the Indian innings.

India began poorly, losing Smriti Mandhana and Shefali Verma inside the first half of the powerplay.

Harmanpreet and Rodrigues settled in and helped India post a powerplay score of 42/2, only a run behind their opponents.

The India captain played the aggressor, while Jemimah played the ideal second fiddle throughout her run-a-ball 33.

Harmanpreet looked in total control as she smashed Alana King's first ball back into the attack straight down the ground for four and swatted the last ball flat over deep midwicket, taking India past the 100-run mark in the 14-run 14th over.

A desperate Meg Lanning brought in experienced Schutt and broke the third-wicket stand that was nearing century, turning the game on its head.

Jemimah was cleaned up and Gardner's two blows in the next over hit the final nail in the coffin for India's chances.

Pooja Vastrakar was holed out without making an impact, and on the very next ball Harmanpreet lost her wicket attempting Dil-scoop as the ball ballooned towards Alyssa Healy who leapt forward to grab it.

India lost the plot when they required 41 off the final four overs. And despite a costly 13-run over from Alana King, Australia sprung a spate of runouts, tightening the noose around India chase.

India lost their final five batswomen for just 13 runs off a dozen balls, while Deepti Sharma's courageous boundaries, and desperate use of reviews of her and concussion substitute Yastika Bhatia only just delayed the inevitable.

Earlier Beth Mooney's 61 off 41 helped Australia post 161 for 8 against India.

Australia failed to get a good start as Alyssa Healy (7) left early, but Mooney and Captain Meg Lanning (36 off 26) had a splendid stand of 74 runs for the second wicket.

But soon, Radha Yadav turned the tables against the Australians with her exhilarating fielding. She first ran out Lanning and latched on to a sensational catch to send back Tahlia McGrath (2).

Deepti also joined the party with Radha after she also pulled off an absolute beauty to give marching orders to Mooney and Smriti Mandhana too nailed a direct hit in the death overs.

The Harmanpreet Kaur-led side entered the final after defeating England by a narrow margin of four runs, while Australia registered a five-wicket win over New Zealand to advance to the final.