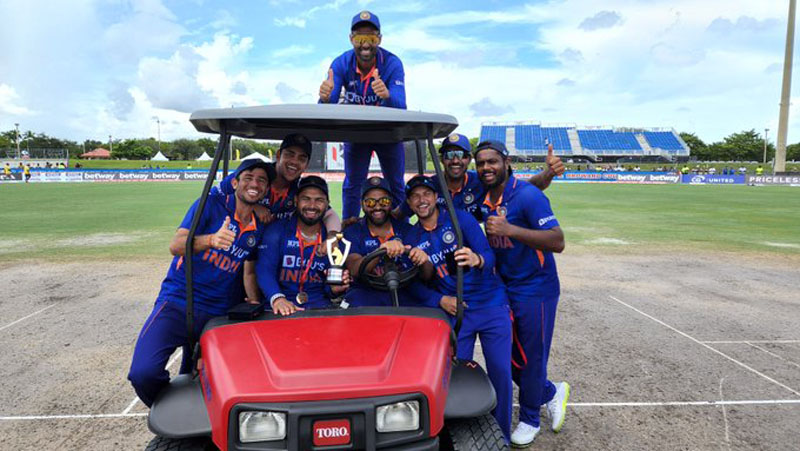 Florida: India won the series 4-1 after defeating West Indies by 88 runs in a mundane fifth T20I match here on Sunday.

Spinners cracked the whip as they shared 10 wickets amongst them as they capitalised on the Windies' weakness against spinners.

Chasing 189, they were never really in it as Axar Patel claimed three wickets upfront. Shimron Hetmyer was exceptional who cracked a brave fifty.

Nonetheless, Ravi Bishnoi and Kuldeep Yadav kept the West Indian batsmen under the pump by picking wickets at regular intervals, restricting the hosts for 100.

Some of the Windies dismissals were silly and amateurish. Even the decision to open the batting with Jason Holder raised many eyebrows.

Earlier India won the toss and opted to bat first with four changes in the side. They started off brilliantly with Shreyas Iyer scoring a fiery 40-ball 60 and was ably supported by Deepak Hooda, who scored 38 off 25 as India posted 122 for three in 13 overs.

India lost the plot in the remaining seven overs as they could manage 66 runs by losing four wickets.

However, Hardik Pandya scripted some lusty blows to push India past 170 runs mark in the end. Nevertheless, Odean Smith finished with figures of 3/33 to restrict India to 188/7.

India eventually wrapped up the series with a 4-1 win. Their only defeat came in the second T20I which West Indies won by 5 wickets.