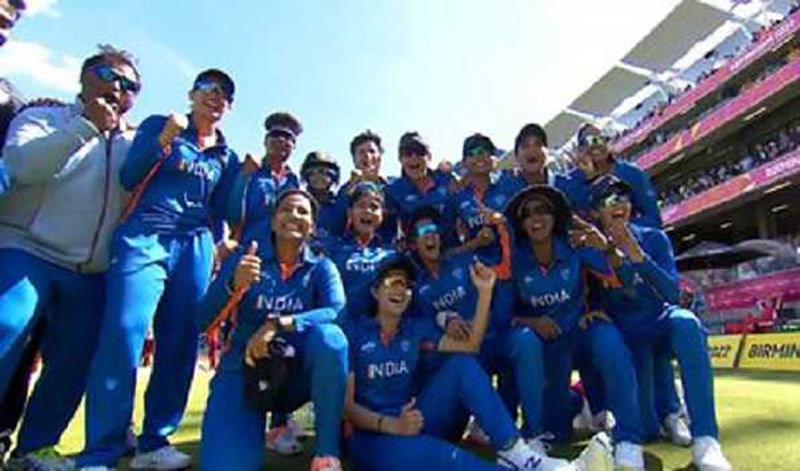 Birmingham/UNI: The Indian women’s cricket team defeated host England by four runs in the semifinals of the Commonwealth Games on Saturday to enter the women's T20 final and assured a medal.

Batting first at Edgbaston, India posted 164/6, powered by Smriti Mandhana’s 64 runs in just 32 balls. She took just 23 balls to reach her fifty, the fastest by an Indian in women’s T20 cricket.

In response, England could manage only 160/6 in 20 overs. Sneh Rana picked up 2/22 while Deepti Sharma gave away just 18 runs in her four-over quota.

Mandhana's gorgeous straight drive off Katherine Brunt in the first over was a sign of things to come. England's experiment to introduce the off-spin of Alice Capsey didn't work out either, as the southpaw picked her apart for two boundaries. She added two more fours in the next over off Brunt.

Mandhana had the answers for whatever England tried to throw at her. Issy Wong was welcomed into the attack with a six and a boundary and Nat Sciver in the next over was dished the same treatment.

She brought up her fifty with the four, at which point she had scored 51 of the team's 55 runs. The fifty off 23 balls was the fastest by an Indian women's player in T20Is, bettering her own record off 24 balls.

Shafali Verma wasn't to be left behind as she too got in on the act and plundered two boundaries in the final over of the Powerplay as India finished with 64.

Freya Kemp finally got England the breakthrough in the 8th over with the dismissal of Shafali Verma. Four balls later, Mandhana followed her opening partner back to the pavilion having failed to clear the short fine fielder with the scoop shot.

The few quiet overs after the Powerplay from England helped them stem the flow of runs. Just when the partnership between Jemimah Rodrigues (44) and Harmanpreet Kaur (20) was budding, a stunning catch in the deep from Maia Bouchier put a halt to the Indian innings.

Deepti Sharma (22) and Rodrigues combined to stitch a 53-run stand for the fourth wicket. The latter smashed four boundaries in a space of eight balls to give India a late push in the death.

India lost two more wickets in the last over but Rodrigues finished with a boundary to set England a target of 165.

Danni Wyatt and Sophia Dunkley set the tone for the chase in the first over with three boundaries of the tournament's top wicket-taker Renuka Singh, thus putting India on the backfoot immediately.

Dunkley smashed consecutive boundaries off Meghna Singh but the introduction of spin became her undoing as she was trapped in front of the stumps by Deepti Sharma.

Despite the fall of the wicket, Wyatt kept England on track with five boundaries in the remaining overs of the Powerplay. India were lucky with their second wicket with the run-out of Capsey. The right-hand batter got her bat past the crease but failed to ground any part of it.

Rana got the prized scalp of Wyatt two overs later but her 27-ball 35 put England ahead of the required run rate.

India kept a lid on scoring thereafter, conceding only two boundaries in the next six overs a boundary in the next three overs.

Harmanpreet's decision to bowl Shafali in the 16th over backfired as she leaked 15 runs in the over but the spinners Deepti and Rana made amends in the next two overs by giving away just three runs each.

Nat Sciver gave England hope with a six and a four (leg byes) in the penultimate over but those hopes were dashed when the captain was run out trying to steal a second soon after.

Harmanpreet placed her trust in the off-spin of Rana to defend 14 runs in the last over. She gave away just nine runs and picked the wicket of Brunt in the process, keeping her nerve to guide India to the finals of the tournament.