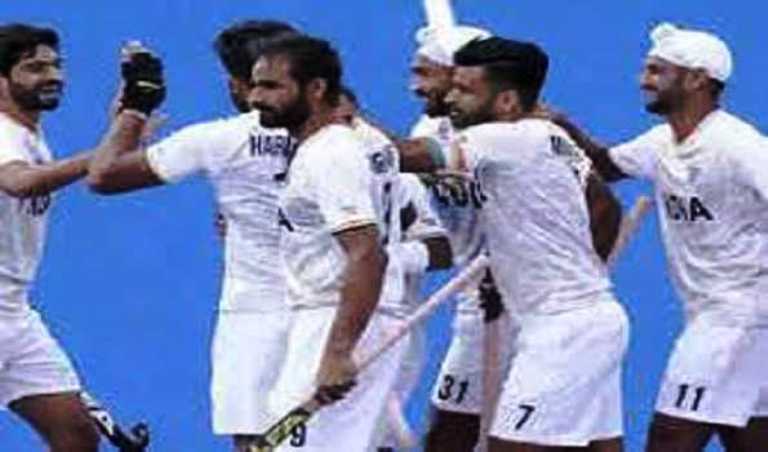 Birmingham/UNI: India's men's hockey team confirmed a spot in the semifinals of the Commonwealth Games (CWG) 2022 with a 4-1 win over Wales in their last pool stage match on Thursday.

Harmanpreet Singh (18', 19', 41') scored a hattrick in the match, while Gurjant Singh (49') also added in a goal as the duo helped their team pull off a solid win in a gritty contest.

Gareth Furlong (55') scored a consolation goal for Wales in the match.

India got off to a cautious start, maintaining possession in the midfield as Wales pressed deeper inside India's half.

The in-form forward Mandeep Singh managed to break through the shackles and enter inside the striking circle, but Wales were able to clear away the danger.

Wales forward James Carson took a shot on target but India goalkeeper PR Sreejesh made a stunning save to deny the opposition. Mandeep Singh created an opportunity in the final few seconds of the first quarter, but the Welsh defence prevented a shot on target, and the scoreline remained 0-0.

Mandeep made a dangerous run from the left flanks in the starting minutes of the second quarter, continuing to put pressure on the Welsh defence. Harmanpreet put India in front as he scored the first goal from a penalty corner. A minute later, he added another goal from another penalty corner.

At the stroke of halftime, Wales pushed forward in number as James Carson broke through the Indian defence. He passed the ball to Rupert Shipperley, who hit it wide, and India went to halftime with a 2-0 lead.

The second half started with Abhishek earning a free hit for India in a dangerous area, which led to the Indian team earning another penalty corner. But this time around, Harmanpreet's powerful drag-flick was saved by Rupert Shipperley.

A great move was set up by the duo of Jarmanpreet Singh and Akashdeep Singh. But the final pass to Gurjant Singh in front of the goal just went wide, much to the relief of Welsh defence.

Harmanpreet completed his hat-trick as he successfully converted a penalty stroke, taking his total goals tally in the tournament to 9. Moreover, he became the highest-scoring individual Indian player in the history of CWG games leapfrogging former skipper Sandeep Singh who scored 6 goals in 2006.

Trailing by three goals, Wales started showcasing urgency in the final quarter. Nilakanta Sharma made a beautiful pass inside the striking circle to Akashdeep Singh, but his shot on target was deflected away by the goalpost. Minutes later, Gurjant Singh struck a ball into the nets to extend India's lead to 4-0.

Goalkeeper Krishan B Pathak made a tremendous save as Gareth Furlong took a shot on target from a penalty corner.

Later, Furlong converted after India conceded another penalty corner, scoring a consolation goal for Wales. India managed to hold on to their lead till the final whistle, winning the match 4-1.