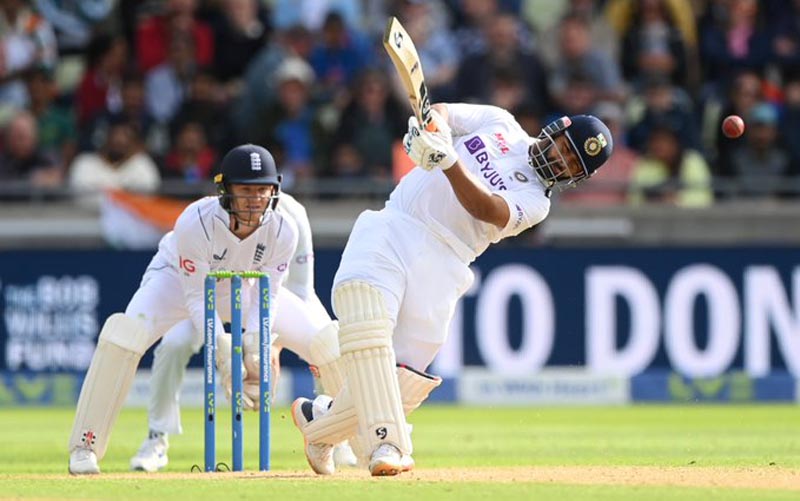 Birmingham: Indian wicket-keeper Rishabh Pant smashed 89-ball century to rescue India from dire straits and end Day 1 at 338 for 7 in the delayed fifth Test against England at Edgbaston here on Friday.

Pant's sterling knock of 146 runs off 111 balls and a fabulous 222 runs partnership for sixth wicket along with Ravindra Jadeja, who is batting on an unbeaten 83 off 163 balls guided India to recover from a top-order collapse.

Both Pant and Jadeja came to the crease when India were reeling at 98 for 5. In a counter-punching knock, Pant clobbered 15 boundaries and a six enroute his fifth Test century and fastest by an Indian wicketkeeper in Tests.

The century also was his second Test century in England and fourth in an away series. Eventually he fell to former England captain Joe Root.
Jadeja played a more calculated innings, playing the perfect second fiddle to the extravagant Pant.

Shubnam Gill and Cheteshwar Pujara gave a decent start, but Hanuma Vihari and Pujara retreated, before Virat Kohli fell again cheaply, and Shreyas Iyer had a brief counter-offensive stay, besides Shardul Thakur went back for 1 after facing 12 balls.

Earlier rain played spoilsport as India finished at 53 for 2 at lunch after James Anderson, who made his return to England side, bagged two wickets.
Vihari and Kohli were batting on 14 and 1 respectively when rain forced umpires to call for an early lunch. Anderson walked back having taken 2 for 15 in 8 overs.

Having missed the last Test against New Zealand due to an ankle injury, England's champion wicket-taker found his rhythm early on after Ben Stokes sent India in to bat first on an overcast morning.

Using the prevalent conditions to his advantage, Anderson sent in a rare short and wide ball, forcing Shubnam Gill to fend to Zak Crawley at second slip, after he had smacked 16 runs off his 17 in boundaries.

Anderson then removed his bunny Pujara, India's other opener, for 13, after Crawley had dropped a more tough chance off Mathew Potts, giving relief to Hanuma Vihari on six.

In the post lunch session, India resumed their first innings at 53 for 2, but lost the third wicket in the form of Vihari.

Vihari was trapped leg before off pacer Mathew Potts after he scored 20 runs.

Kohli also walked back to the pavilion as his timbers were disturbed when he got an inside edge of Potts after he scored 11 runs.

Iyer looked good and smacked Potts for three boundaries, but lost his wicket by edging James Anderson to wicketkeeper Sam Billings at 15 runs.

Jadeja joined Pant in the middle and started to build a partnership. Pant cut loose after he clubbed spinner Jack Leach for 4,4,6 in the 37th over which completed their 50-run partnership for the sixth wicket.

Pant reached his fifty with a four over the deep square leg.

The Test was rescheduled just hours before the Manchester Test last September because of coronavirus concerns within the India camp.

England retained only four players - Joe Root, Ollie Pope, Jonny Bairstow and Anderson - that lost to India at the Oval last year, leaving them 1-2 behind India in the five-match series.

India are without the services of Rohit Sharma and KL Rahul. While Rohit was ruled out after testing Covid positive, Rahul had a groin injury.

India are eyeing their first series win in England since 2007 and just their fourth in after successes in 1971 and 1986.