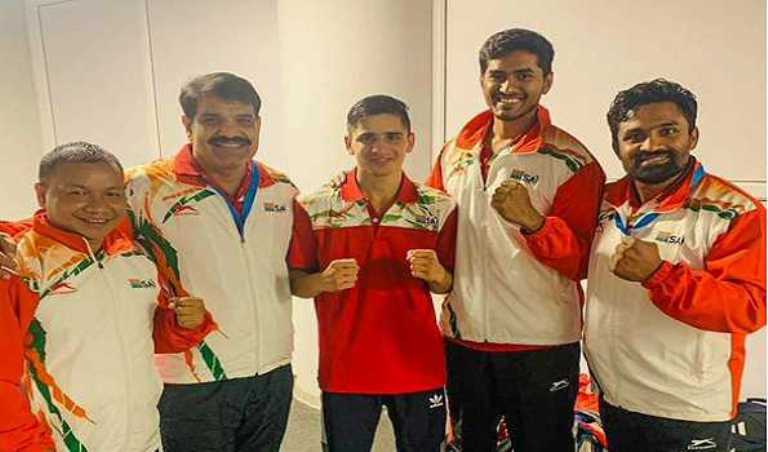 New Delhi/UNI: Reigning youth world champion Sachin made his way into the men’s 57kg quarter-finals of Elorda Cup with a crushing win over Ykhlas Gylychjanov in Kazakhstan’s capital, Nur-Sultan on Thursday.

Sachin produced a power-packed performance against his opponent from Turkmenistan to register a 5-0 win. Most aggressive among the two pugilists, Sachin exhibited a great display of skilful boxing and maintained his dominance throughout the contest.

Meanwhile, the challenges of Simranjit Kaur and two other Indians ended on the second day of the tournament following defeats in their respective matches.

Lakshya Chahar and Harsh Lakra, on the other hand, conceded identical 0-5 defeats to their Kazakh rivals in the men’s section.

The reigning national champion Lakshya lost to Abzal Kuttybekov in the 86kg quarter-final encounter while Harsh was outpunched by Yerassyl Zhakpekov in the 80kg preliminary round.

Sushma will face a relatively tough challenge as she will take on the former world and reigning Asian champion Lazzat Kungeibayeva of Kazakhstan. Kalpana will also square off against another Kazakh boxer, Madina Nurshayeva—the 2017 Asian champion.

Top players from strong boxing countries such as India, Uzbekistan, hosts Kazakhstan, Cuba, China and Mongolia, are competing at the inaugural edition of Elorda Cup. Finals will be played on July 4.

Late on Wednesday night, Kirti lost to Japan’s Rinka Tanaka by a close 2-3 margin in the women’s 60kg opening round match.

The champion boxer will receive USD 700 while the silver and bronze medal winners will take home USD 400 and USD 200 respectively.