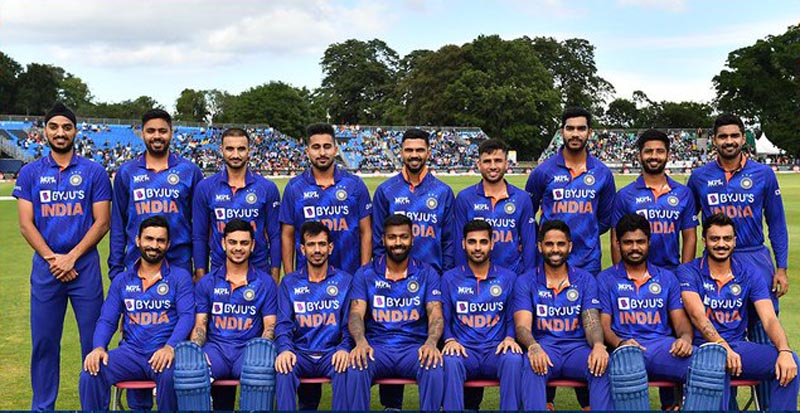 Opting to bat first, India piled a colossal 227/7 in 20 overs while Ireland in reply nearly got to the target, but a fantastic last over by Umran Malik denied the Irish batsmen to cross over the line. They scored 221 for 5.

Hooda and Samson put on 176 runs for the second wicket partnership in 65 deliveries, the highest stand by any Indian batting pair in T20Is.

The pair outdid Rohit and Rahul's 165 runs partnership against Sri Lanka at Indore in 2017. And also surpassed Jos Buttler and Dawid Malan's 167-run stand against South Africa at Cape Town in 2020.

Hooda was dismissed on 104 off just 57 balls, an innings that was decorated with 9 boundaries and 6 sixes, while Samson who replaced an injured Ruturaj Gaikwad, hammered 77 off 42 balls with the help of 9 boundaries and 4 sixes.

With this knock, Hooda became the fourth Indian batsman to score a century in T20I after Rohit Sharma, KL Rahul and Suresh Raina.

And Hooda became the third Indian batsman to score a T20I century outside India after Rohit and Rahul.

He also surpassed Rohit's 97 which was highest by an Indian batsman against Ireland.

Hooda looked more aggressive while Samson played the second fiddle as India reached 54 for 1 after 6 overs.

Hooda reached his half century in 27 balls soon after powerplay. Soon, Samson too reached his fifty in 31 balls as India were on the prowl for a big total.

Suryakumar Yadav got into the act straightaway and smacked for a six and a boundary as India soared to 200-plus mark in the same over.

India suffered a mini-collapse towards the end of the innings, losing Suryakumar, Dinesh Karthik, Axar Patel and Harshal Patel for zero each.

Suryakumar (15) and Hooda lost their wickets to Joshua Little.

Craig Young scalped two wickets in consecutive balls in the 19th over as Dinesh Karthik and Axar Patel failed to open their innings.

The visitors lost Ishan Kishan after opting to bat first.

For Ireland, Mark Adair took three wickets, while Young and Little got two apiece.
In reply, Ireland got off to a great start scoring 65 runs in five overs. Ravi Bishnoi drew the first blood by cleaning up Paul Stirling for 40 off 18 balls.

Gareth Delany was unfortunately runout in the very next over, but skipper Andrew Balbirnie (60 off 37 balls) kept Ireland's hope alive as he notched up his 6th T20I fifty.

The skipper's departure did not jolt the hosts as the Irish batsmen cut loose. Harry Tector (39 off 28 balls), George Dockrell (34 no off 16 balls) and Mark Adair (23 no off 12 balls), kept the hosts in the hunt.

With 17 runs needed to square the two-match T20I series, the not out batsman clubbed a couple of boundaries, but Umran kept his cool and India snuck in by a whisker.