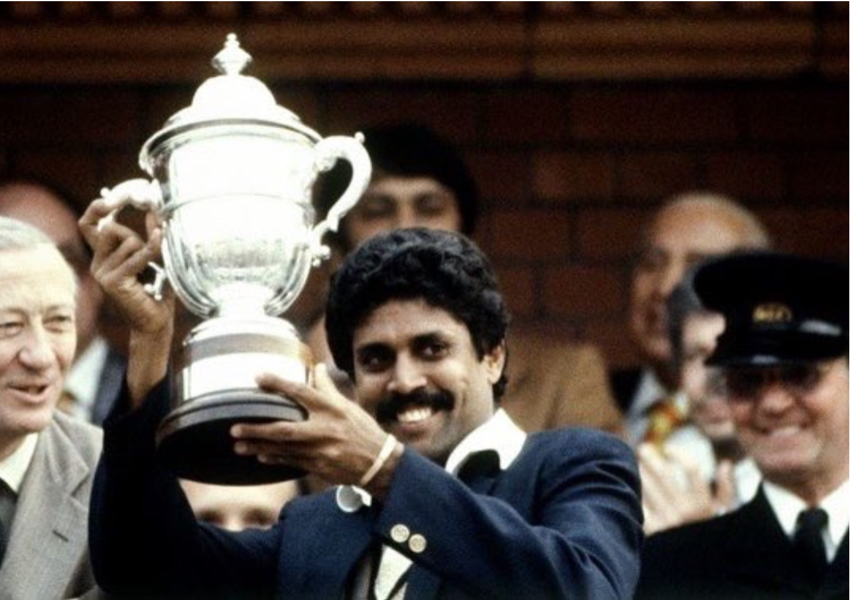 Look back in wonder: Kapil Dev and his men won 1983 World Cup on this date 39 years ago

New Delhi: Thirty-nine years ago, young Kapil Dev and his mighty men had shocked mighty West Indians to lift the country's first World Cup trophy in 1983, marking a new era in the world of cricket which slowly shifted from the Caribbean dominance towards South Asia.

A team, which was least considered would be able to make a mark in the iconic tournament, especially after their poor show in the previous two editions, left the world baffled when Kapil Dev led from the front to defend a paltry score of 183 runs to bring home the Prudential Cup.

India defeated West Indies, which was considered as the strongest team in the world at that time, by 43 runs at the historic Lord's cricket ground.

Mohinder Amarnath was awarded the Man of the Match for his all-round performance in the final match.

This was the third consecutive World Cup final appearance for the West Indies, having won the last two editions of the tournament in 1975 and 1979.

India was making their first appearance at a World Cup final after defeating England by six wickets in the first semi-finals.

This was also the first appearance by an Asian nation in a World Cup final.

Interestingly, the next South Asian team to play the final of the tournament was Pakistan in 1992. Ex-captain Imran Khan and his players had defeated England in the final to win the trophy.

In the 1983 final, India lost the toss and were asked to bat first against a West Indies team that arguably boasted the world's best bowling attack.

Only Mohinder Amarnath (26 from 80 balls) and Kris Srikkanth (38 from 57 balls) put up significant resistance as Roberts, Marshall, Joel Garner and Michael Holding ripped through the Indian batsmen, ably supported by Gomes.

Surprising resistance by the tail allowed India to compile 183 (all out, 54.4 overs), a total considered as too low to defend against the mighty batting lineup which included Viv Richards.

However, the Indian bowling exploited the weather and pitch conditions perfectly to bowl out the best batting lineup of the era for 140 from 52 overs in return, winning by 43 runs and completing one of the most stunning upsets in cricket history, defeating the previously invincible West Indies.

Amarnath and Madan Lal (3-31) each took three wickets, and one memorable moment was the sight of Kapil Dev running a great distance (about 18-20 yards) to take a catch to dismiss Richards, the West Indies top scorer with 33 from 28 balls.

Amarnath was the most economical bowler, conceding just 12 runs from his seven overs while taking three wickets.

Taking to Twitter, Sachin Tendulkar shared the winning captain Kapil Dev's picture of holding a World Cup trophy and said: "Some moments in life inspire you & make you dream. On this day in 1983, we won the World Cup for the first time. I knew right then, that’s what I wanted to do too!"

The Board of Control for Cricket in India (BCCI) tweeted: "A historic day & a landmark moment for Indian cricket as #TeamIndia, led by Kapil Dev, clinched the World Cup title."

In 2021, 83 movie released in threate which narrated the inspirational journey of the Indian team in the 1983 World Cup. Actor Ranveer Singh played the character of Kapil Dev in the film.