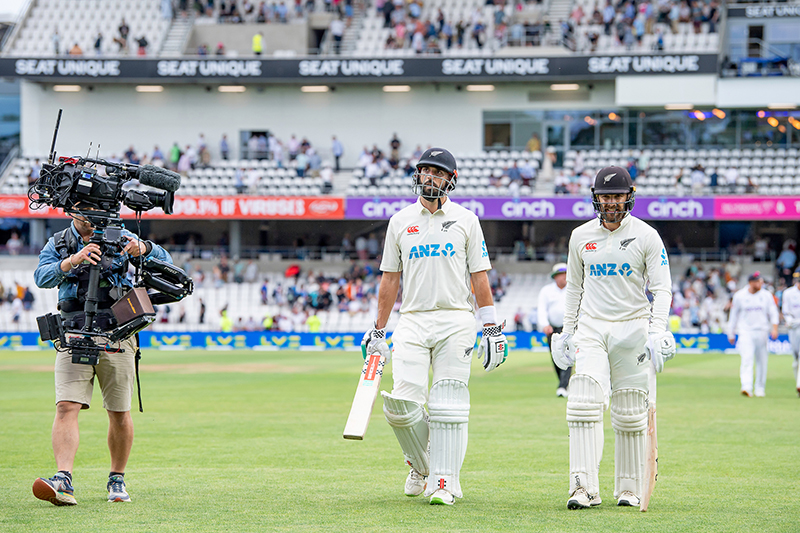 Leeds/UNI: Daryl Mitchell and Tom Blundell's century partnership yet again came to the rescue of New Zealand on Day 1 of Headingley Test against England here on Thursday.

The Black Caps finished the day with 225/5 on the scoreboard with Mitchell and Blundell batting on 78 and 45 respectively.

The visitors made a terrible start after Tom Latham fell to Stuart Broad in the very first over of the day.

New Zealand received a massive blow before the lunch break as they lost captain Williamson who fished outside the off stump of Stuart Broad, only to edge to Ben Foakes behind the timbers.

Having lost three top wickets, New Zealand dropped anchor and steadied the innings. Mitchell and Devon Conway (26) tried their luck in upping the ante against spin, but debutant Jamie Overton castled the southpaw.

New Zealand were also quite unlucky before the Tea break when Henry Nicholls (19) was out in a freaky fashion. He drove straight, only for the ball to hit the evading non-striker batsman's bat that ballooned to the mid-off fielder Alex Lees off Leach's delivery.

The visitors were however very lucky as Mitchell survived an LBW shout which the replays confirmed that he was plumb had England opted for a review.

Mitchell and Blundell saw to it that their side did not lose any further wicket in the final session. As soon as they got into their groove, Mitchell reached his half-century after smashing Leach for maximum.

The skies opened up for a brief period but did not affect Mitchell and Blundell's momentum.

In their desperate attempt to break the sixth wicket stand, England opted for DRS but were not rewarded. Both the batsmen stood their ground even against the second new ball before the umpires called for the day.