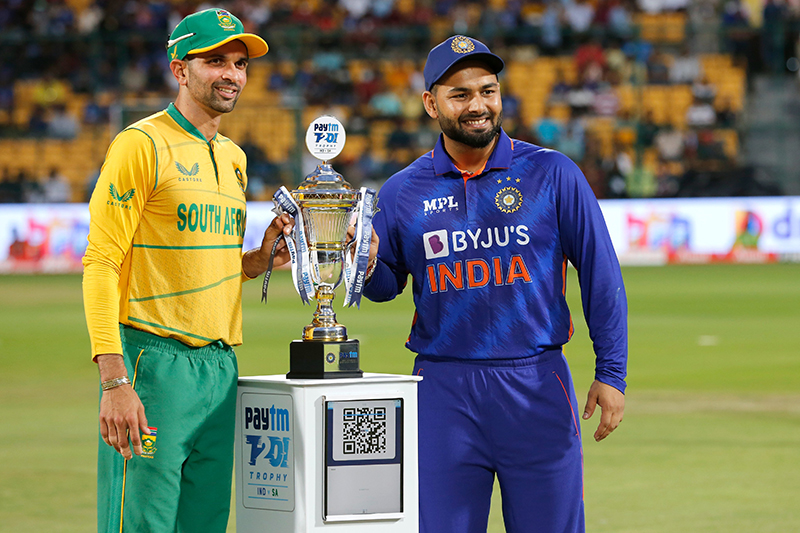 Bengaluru/UNI: The series decider between India and South Africa was called off due to rains at the Chinnaswamy Stadium here Sunday.

The spectators were expecting a riveting finale to the series with India forcing a decider at Chinnaswamy after it sketched a brilliant comeback in Visakhapatnam and Rajkot, following their defeat in first two games.

But the rain gods played spoilsport, robbing some great entertainment that was surely in the offing.

India would be sulking for missing an opportunity to clinch the series from South Africa as they had never lost a limited-overs series on Indian soil since 2011.

The spectators however witnessed 21 balls of cricket with Lungi Ngidi helping South Africa gain control over the hosts.

South Africa spinner Keshav Maharaj, who was deputing as captain for South Africa in the absence of injured Temba Bavuma, was whacked for two sixes in the first over, bringing the spectators to their feet in joy.

Their joy was short lived as a magnificent slower yorker castled Ishan Kishan (15), while another slower ball dismissed Ruturaj Gaikwad (10).

Rain also poured down minutes prior to the start of the match after Maharaj had sent India into bat.

Down 0-2 after the first two games, captain Rishabh Pant was under serious pressure. Ruturaj Gaikwad and Ishan Kishan laid solid platforms for Dinesh Karthik and Hardik Pandya to do the finishing act and provide cushion for the Indian bowlers.

Yuzuvendra Chahal and Avesh Khan did not disappoint the think tank led by Coach Rahul Dravid as they lifted India's game. It was pleasant to see Bhuvaneshwar Kumar amongst the wickets.

Harshal Patel displayed his dexterity in variations. But Pant as a batsman was a big disappointment.

South Africa were hit with injuries to Quinton de Kock, Bavuma and Kagiso Rabada, Wyne Parnell and Aiden Makram due to Covid.

Despite this, the visitors managed the resources adequately.