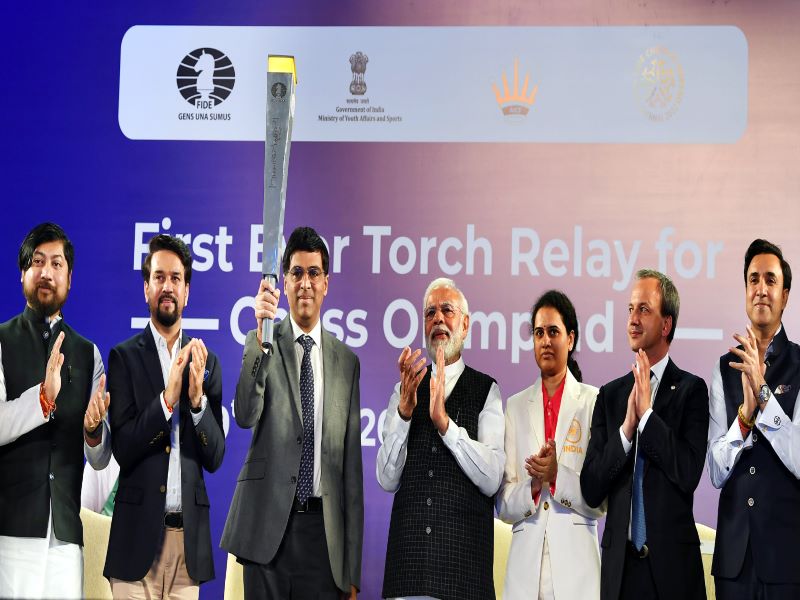 FIDE President Arkady Dvorkovich handed over the torch to the Prime Minister, who in turn handed it over to Grandmaster Vishwanathan Anand. 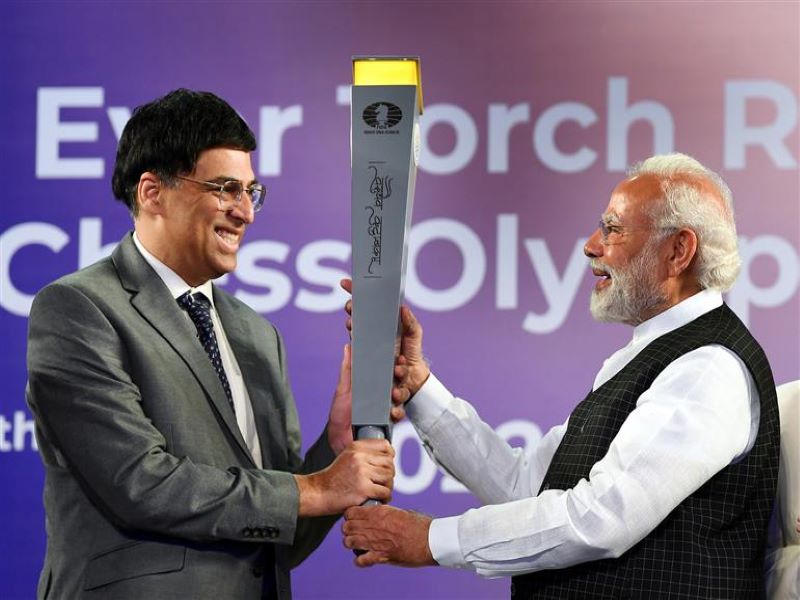 This torch will be taken to 75 cities in a span of 40 days before the final culmination at Mahabalipuram near Chennai.

At every location, chess grandmasters of the state will receive the torch. 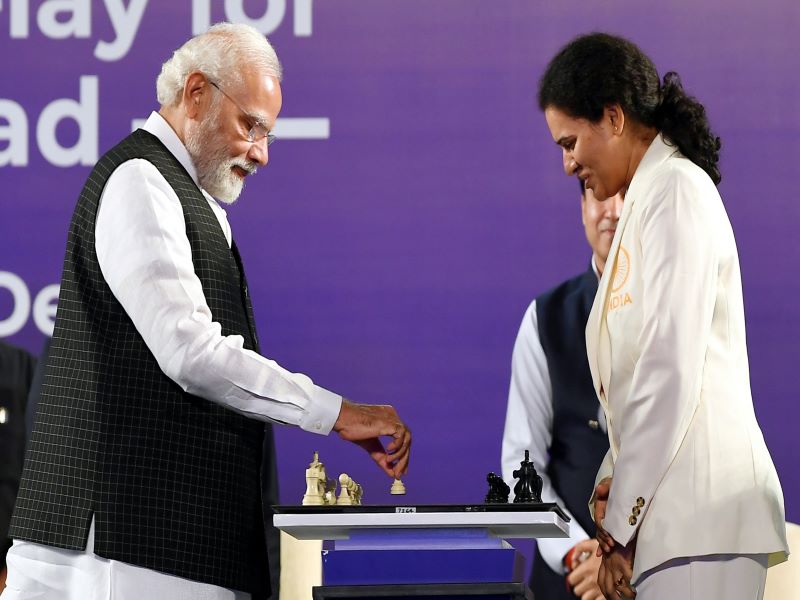 Union Ministers Anurag Singh Thakur and Nisith Pramanik, Chess players and enthusiasts, Ambassadors, and Chess Officials were among those present on the occasion.

At launch of torch relay for the 44th Chess Olympiad, I convey my best wishes to all the participants. https://t.co/uLbZ5JoSRr

FIDE President Arkady Dvorkovich thanked the Indian government for taking the initiative to start the new tradition of torch relay which will popularise and galvanise the game all over the world.

“FIDE is grateful to Prime Minister Narendra Modi for his presence and honouring us,” he said and recalled the Prime Minister’s speech on the occasion of most players playing chess in one place in 2010 on the significance of the game in building new capabilities and role of combination of education and sports in leading to success.

He hoped that Chess would become part of all schools across India and all over the world.

He said “India today is the fastest-growing Chess country and you have all grounds to be proud of that. We are grateful for your leadership for all the fantastic work that you are doing in the interest of Chess.”

He continued “Centuries ago,  the torch of this sport went to the whole world in the form of Chaturanga from India. Today the first Olympiad torch of chess is also coming out of India. Today, when India is celebrating its 75th year of independence, Amrit Mahotsav, this Chess Olympiad torch will also go to 75 cities of the country.”

He said  “FIDE has decided that the torch relay for each Chess Olympiad game will start from India itself. This honour is not only the honour of India, but also the honour of this glorious heritage of chess. I congratulate FIDE and all its members for this”

The Prime Minister dwelled on the Indian heritage in Chess. He said: “Our ancestors invented games like Chaturanga or Chess for analytical and problem solving brains. Chess, via India, reached many countries of the world and became very popular.

"Today, chess is being used in schools as an educational tool for young people, for children.”

He noted that in recent years, India is consistently improving its performance in Chess.

This year, India’s contingent in the Chess Olympiad is the biggest so far.

The Prime Minister expressed hope that India will create a new record of medals this year.

The Prime Minister said every piece of chess has its own unique strength and unique ability, and only with right moves its power can be realised properly, and then it becomes the most powerful.

"This specialty of Chessboard gives us the big message of life. If given the right support and the right environment, no goal is impossible even for the weakest,” he said.

Highlighting another lesson from Chess, the Prime Minister said the game teaches us that real success comes from far-sighted rather than short-term success.

The Prime Minister pointed out that this lesson informs India’s sports policy and schemes like Target Olympics Podium Scheme (TOPS) which have started yielding results.

Referring to India’s recent successes in Tokyo Olympics, Paralympics, Thomas Cup and boxing the Prime Minister said the 'Khelo India' campaign, which is about spotting potential sports talents at a young age, is providing the right platform youngsters.

Sports talents are emerging from far-flung areas of the country under Khelo India and modern sporting infrastructure is being created in different towns and districts of the country, he noted.

Under the New Education Policy, sports have been treated at par with other academic subjects.

He said that many new dimensions of sports like physio, and sports science are coming to the forefront and many sports universities are being opened in the country. 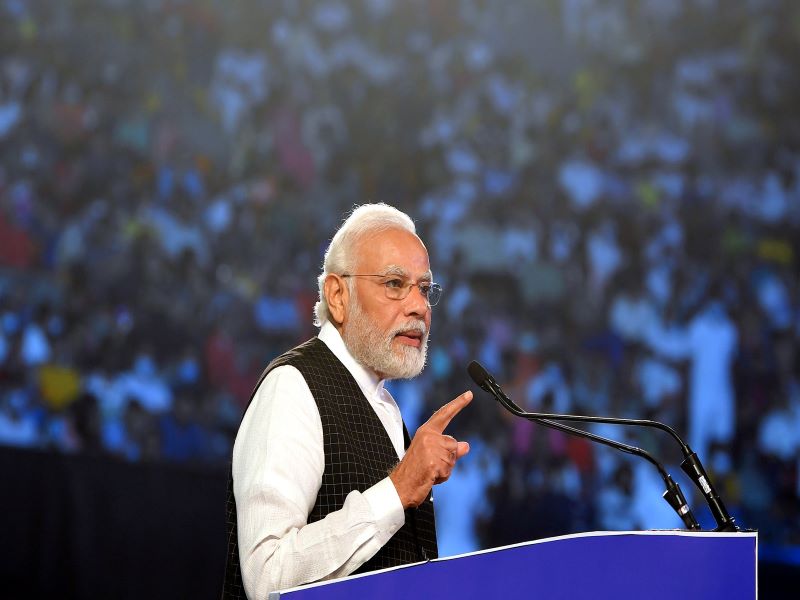 The Prime Minister acknowledged the pressure of expectations on the player and advised them to give their hundred percent with zero percent tension or pressure.

He suggested that Yoga and meditation can help a great deal in strengthening brain power and a calm and composed state, which is essential for recovering one's prospects after a wrong move in a game of Chess. He appealed for making Yoga part of daily life and for enthusiastic participation in upcoming International Yoga Day.

India will be the first-ever country to have the Chess Olympiad Torch Relay. Notably, taking the Indian roots of Chess to a greater height, this tradition of Torch Relay for the Chess Olympiad will henceforth always begin in India and travel across all continents before reaching the host country.

The 44th Chess Olympiad will be held in Chennai from July 28 to August 10, 2022. The prestigious competition, which has been organised since 1927, is being hosted in India for the first time and in Asia after 30 years. With 189 countries participating, this will be the largest participation in any Chess Olympiad.