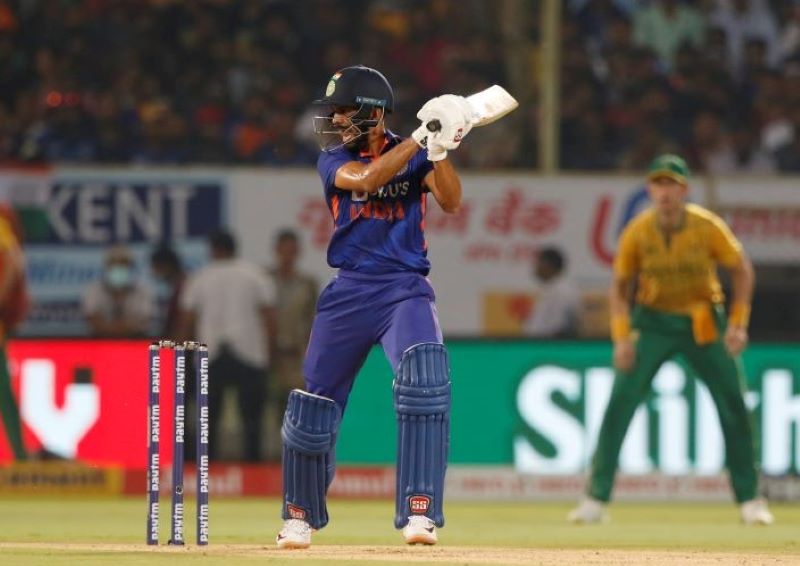 Visakhapatnam/UNI: An all round performance by India saw them defeating South Africa by 48 runs in third T20I to keep their hopes alive in the 5-match T20I series at YSR Reddy ACA-VDCA Cricket Stadium here Tuesday.

In a must-win match, openers Ruturaj Gaikwad (57) and Ishan Kishan (54) gave a rollicking start by putting on 97 runs for the first wicket by belting half-centuries.

However, South Africa pegged India back in the second half of the innings, but in came Hardik Pandya (31 no) who did well to take India to 179 for 5.

Harshal Patel and Yuzuvendra Chahal came to the party during South Africa's chase. Axar Patel and Harshal accounted for the South African openers inside the powerplay.

The spinners, especially, were fantastic as they shared four wickets between them.

Chahal was the prime bowler for India who picked 3 wickets for 20 runs.

He removed Rassie van der Dussen (1) and Dwaine Pretorius (20) off successive overs which pushed the visitors on the back foot.

Harshal deceived David Miller (3) with a slower one and Springbucks hopes were pinned on Heinrich Klaasen (29).

Chahal ensured that there was no flourish off Klassen's bat as the leggie gave the killer blow in his final over to finish with impressive figures.

Bhuvaneshwar Kumar (1 wicket) was at his best and Harshal ended up with a four-fer.

Earlier, half-centuries by openers Gaikwad and Ishan and late flourish by Pandya propelled India to 179 for 5.

India managed just 51 runs off the last 7 overs and Shreyas Iyer felt that the hosts were 15-20 runs short.

Kudos to the South African bowlers who pegged India back after they got off the blocks aggressively.

In the very first over of Anrich Nortje, Gaikwad got five boundaries. Ishan played second fiddle to Gaikwad, but left the scene soon after reaching their respective fifties.

The momentum hit the road block after Shreyas Iyer (14 off 11) and Ishan were dismissed in successive overs.

Dinesh Karthik (6) was snapped up by Wayne Parnell Kagiso Rabada and Rishabh Pant (6) was claimed by Dwaine Pretorius after Temba Bavuma took a catch.

South Africa must be fancying the 180 runs target and make it 3-0, considering the killer of a form they are in.

South Africa had won the toss and skipper Bavuma had elected to bowl.

India has to win this match to stay alive in the series as they trail South Africa 0-2 in the series, having lost the first two games in New Delhi and Cuttack, respectively.