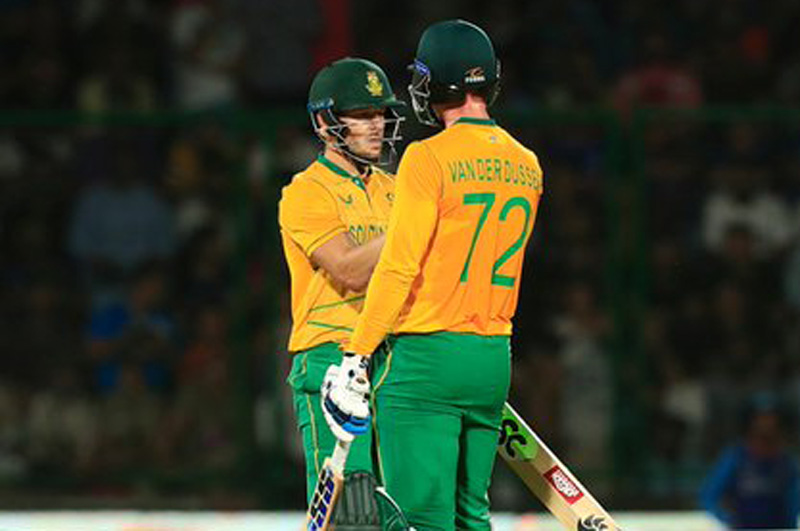 New Delhi: Rassie van der Dussen (75 no) and David Miller (64 no) hit unbeaten half centuries as they helped South Africa beat India in the first T20 match of the series by seven wickets here on Thursday.

After India recorded 211 runs for the loss of four wickets, South African batsmen cruised to the target of 212 runs by losing just three wickets with seven balls to spare.

Miller also hit four boundaries and five sixes in his innings as he completely destroyed the Indian attack.

Bhuvneshwar Kumar, Axar Patel and Harshal Patel picked up a wicket each.

211/4 is the highest total for India versus South Africa surpassing the previous high of 203/5 in Johannesburg in 2018.

Kishan's power-hitting batting display put India on course for a big total. He smashed 76 runs off 48 balls with 11 boundaries and 3 sixes.

The Mumbaikar completed his half-century by smoking Keshav Maharaj for a six on the 37th ball he faced. It was, however, a chance knock for Kishan. Right after celebrating his 50 he miscued a slog sweep but the ball fortunately landed between several onrushing fielders.

Before he walked back to the pavilion, Kishan copped over Maharaj by punishing him for two sixes in the first two balls and crasmoking two boundaries in next two.

He miscued a sweep shot and was given out by the straight umpire but overruled it after the TV umpire ruled the DRS in Kishan's favour on the fifth ball of the over.

The very next ball Maharaj had his man after Kishan found the long-on fielder.
India were off to a great start as both Ishan and Ruturaj Gaikwad rode their luck to stitch a 50+ opening stand.

Shreyas Iyer (36 off 27 1x4 3x6) played his part by taking on the spinners in the middle overs though he decreased the pace of his innings in the second half of his knock.

Captain Rishabh Pant (29 off 16 2x4 2x6) made handy runs and then Hardik Pandya (31 no 2x4 3x6) displayed his swag with the bat donning the finisher's role to perfection.

Ariche Nortje bowled a great last over to keep it to 211.