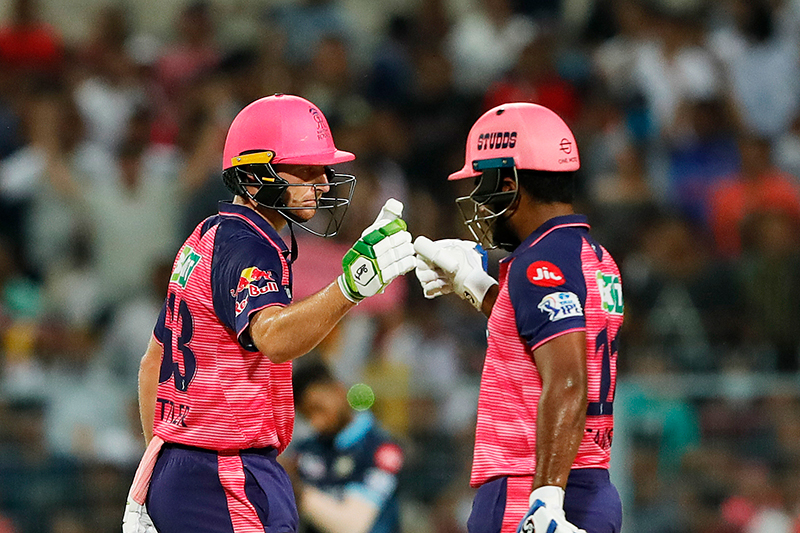 Continuing his dream run in this year's IPL, which has entered into its last week, Buttler slammed 89 off 56 balls until he was ran out in the 20th over's last ball, which later turned out to be a no-ball.

Though he was lucky to be dropped in the 19th over by Afghan cricketer Rashid Khan, Buttler's innings, which was quiet in the first half, gained momentum in the next causing allround trouble for Gujarat, who are led by Hardik Pandya.

Buttler's 89 was powered by 12 fours and two sixes in the match which will decide the first finalist of the IPL 2022.

After the dismissal of Yashasvi Jaiswal cheaply in the last ball of the second over, skipper Sanju Samson took charge of the innings with an aggressive start, forcing Buttler, who has slammed three centuries in IPL 2022, to play the second fiddle.

Samson's aggression started peaking when he went for two boundaries against senior Indian pace bowler Mohammed Shami in the fifth over.

Surely he was in no mood to tone down as the skipper went on for two sixes in the final over of the powerplay, which was bowled by Alzarri Joseph, who entered into the squad in place of Lockdie Furgoson.

With five fours and three sixes in total, Samson was cruising into his half-century until he was dismissed by Ravisrinivasan Sai Kishore, who conceded 43 runs in four overs.

The two, Samson and Buttler, piled 68 runs for the second wicket, the fall of which had temporarily stalled the reigning runs.