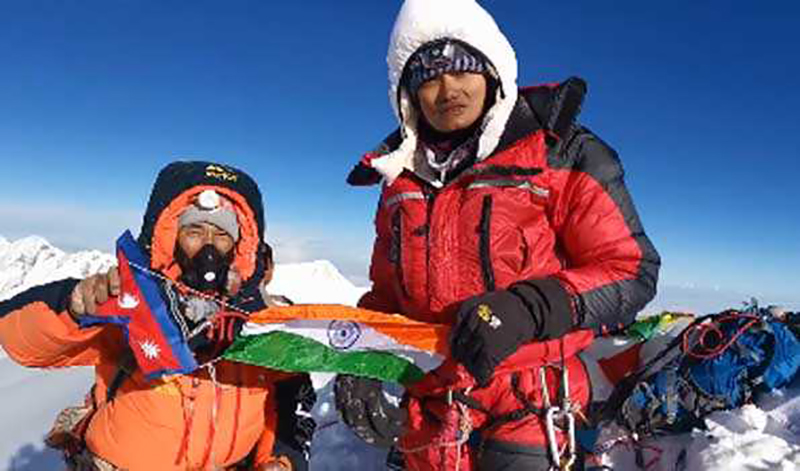 Kolkata/UNI: Mountaineer Piyali Basak on Sunday achieved a new milestone in the history of Mountaineering in West Bengal by climbing Mount Everest (8848 mts) without the help of supplemental oxygen, a report reaching here said.

Piyali, who successfully scaled Mount Dhaulagiri I (8167 m) on Oct 1, 2021, and became the first Indian woman on the summit of world's seventh highest mountain without supplemental oxygen, unfurled the national tri-colour (Indian flag) at around 9 am Sunday, the report added quoting her agent office M/S Pioneer in Kathmandu.

"Piyali Basak has reached the top of the world without supplemental oxygen support," the message said.

Piyali, who was out to summit Mount Everest and Mount Lhotse without the supplementary oxygen support, almost had to give up her expedition owing to funds shortage but she finally received the permission for Everest on Friday morning.

In her late 20s, Piyali made her summit push around 7 pm ( Nepalese time) on Saturday and reached the summit around 9 am ( Nepalese time ) hours along with a sherpa guide from the Nepal side.

Piyali is the first woman from Bengal to have summited atop the Everest without oxygen bottle, which is must above 27,000 ft.

After a day's rest Piyali, a girl from Chandannagar in the Hooghly district, would attempt Lhotse, the fourth highest mountain in the world at 8,516 metres, on Monday without the help of oxygen bottle, a report reaching here said.