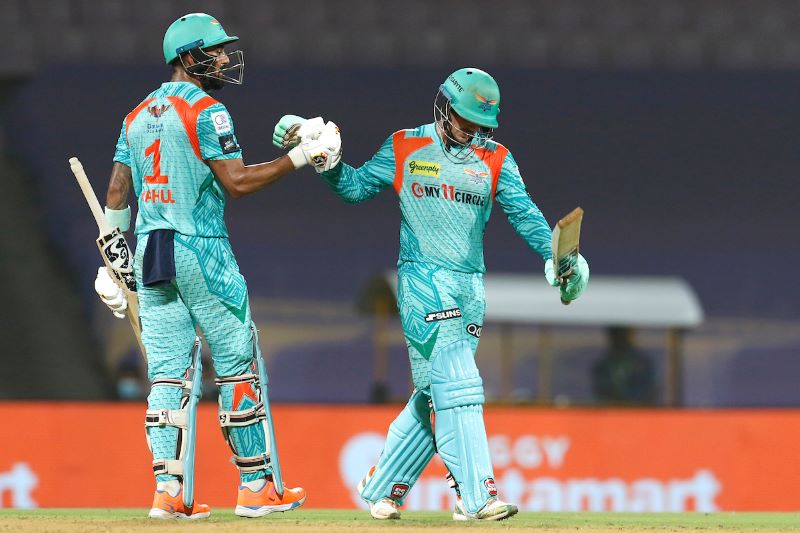 Quinton De Kock was sensational who steamrolled the KKR attack. It was an absolute carnage.

61 runs were plundered off the last three overs, an assault which took the game out of KKR's reach.

De Kock was given a life early in his innings and he made the most of it. The game was for the brave. There were so many momentum shifts and at the end of it all, LSG were home by the narrowest of margins.

The target always seemed a stiff one on this surface, but KKR never gave up.

When they lost their openers early, Nitish Rana and Shreyas Iyer stepped up.

Sam Billings also chipped in and at the halfway mark, the chase was well and truly on. But then LSG's defending skills came to the fore with the run rate being squeezed.

Wickets started tumbling and once Russell fell, all thought surely, KKR were down for the count. Rinku Singh and Sunil Narine, made a game out of it from nowhere.

KKR would have fancied getting home from there. But Lewis grabbed an absolute screamer to send Rinku back and then Marcus Stoinis held his nerve to see LSG through.

The opening stand was the highest opening ever in IPL history De Kock's 140 not out is the third-highest score in IPL history and it was for the first time an opening combination batted through the 20 overs in the first innings of IPL.

It was also the third highest partnership for any wicket in IPL.

De Kock got to his ton with a boundary and brought up his second IPL ton off just 59 balls.

De Kock turned on the screws heading into the final five overs. He hit Varun Chakravarthy for two sixes and a four in an 18-run over while racing into the 80s.

He raced past his fifty and then reverse swept Sunil Narine for a six as LSG went past 100.