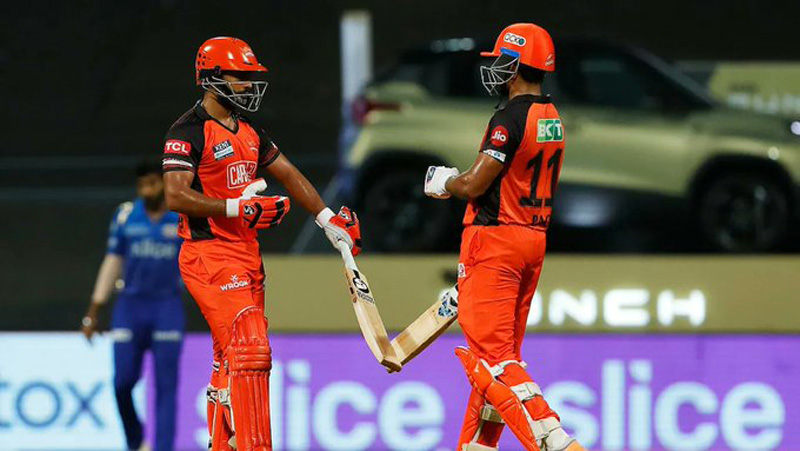 Mumbai: A maiden wicket over by Bhuvaneshwar Kumar and a scintillating 76 runs knock of Rahul Tripathi saw Sunrisers Hyderabad clinch an humdinger by 3 runs against Mumbai Indians in the 65th IPL match at Wankhede Stadium here on Tuesday.

Coming into the match after a five-match losing streak, SRH did not have any option but to win this one as they needed the last two games to end in their favour.

And they did it in style. Until Tim David (46 of 18) was in the middle, MI were within sight of a victory.

He reduced the margin with a 26-run over off T Natarajan in the 18th over.

However, he was run out on the final ball of the over to give SRH hopes. Bhuvneshwar Kumar (1/26) bowled an outstanding 19th over by bowling a wicket maiden as SRH tightened the screws.

In the last two overs MI needed 19 runs, but Bhuvi overturned the cart in favour of SRH. SRH held their nerve to finish on the winning side and picked up two crucial points.

They are tied with Kolkata Knight Riders and Punjab Kings on 12 points, but are still on 8th, behind NRR.

The pair added 95 runs for the opening wicket before falling in successive overs. SRH kept picking wickets at crucial times, with Umran Malik picking two in an over.

Tripathi's stunning half-century and cameos from Priyam Garg and Nicholas Pooran powered Sunrisers Hyderabad to a total of 193/6.

It was a good total for SRH who were facing a challenging task of keeping their IPL 2022 playoff hopes alive. SRH lost Abhishek Sharma (9) early, but Tripathi (76) and Priyam Garg, did well to revive the innings with a 78-run stand.

This was Tripathi's third half-century this season and got there off 32 balls. Garg fell for 42, but Tripathi and Pooran joined hands for a dynamic stand to take SRH over 150.

They looked set to get a big total, but Mumbai Indians did well to pull things back. SRH were well on their way in the 17th over, but MI pegged them back by removing set batsmen Tripathi and Pooran (38) as they finished below 200. SRH managed to score 45 runs in the last 5 and would feel they could have got a few more had Tripathi and Pooran stuck on for a bit longer. Ramandeep Singh bowled a brilliant double-wicket two-run 18th over.

He finished with figures of 3 for 20.