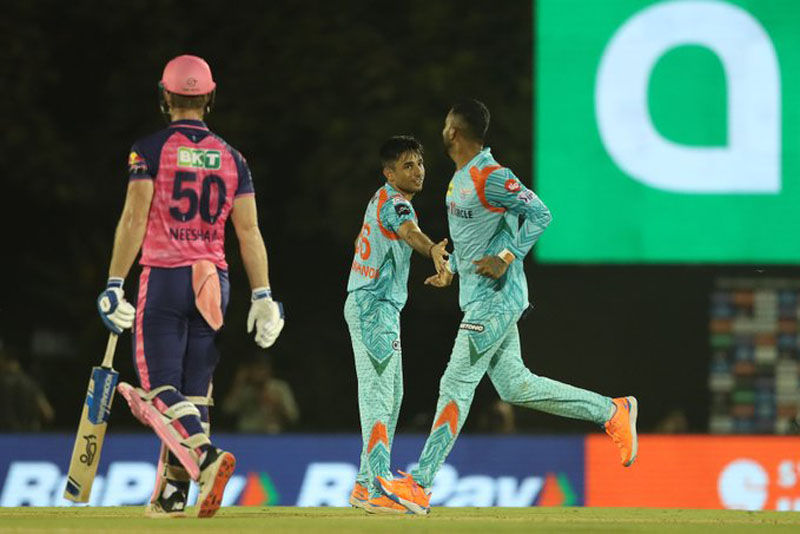 With this victory, Hardik Pandya-led GT, who have already qualified for the playoffs, cemented their place in the top-two.

Chasing a paltry total of 134 runs, GT got off to a good start as Shubman Gill and Wriddhiman Saha (67*) put up 59 runs on the board for the opening stand.

Gill was trapped lbw by Matheesha Pathirana for 18 off 17. Then, Matthew Wade scored 20 before he was removed by spinner Moeen Ali in the 12th over.

Soon, skipper Pandya dismissed in 14th over. After that, Saha and David Miller (15*) stitched together a partnership of unbeaten 37 runs, helping GT win the match by seven wickets with five balls to spare.

For CSK, Pathirana took two two wickets after considering 24 runs in 3.1 overs while Moeen Ali got one wicket.

Earlier, Chennai won the toss and decided to bat first.

They lost the opener Devon Conway early as Mohammad Shami struck in the second over to give Gujarat early breakthrough.

Then Ruturaj Gaikwad and Moeen Ali took powerplay total to 47/1.

The duo stitched 57-run partnerships for the second which Sai Kishore broke in the ninth over by removing Moeen for 21.

He mistimed the slog-sweep and caught by Rashid Khan at deep mid-wicket. Titans' bowlers kept CSK batters in-check as they scored 23 runs off the last 30 balls for the loss of 3 wickets.

In the 15th over, Gaikwad brought up his third fifty of the season and established a 48-run stand for the third wicket with N Jagadeeshan. But, Rashid Khan struck in the same over with a rising delivery to dismiss set batter Gaikwad for the score 53 off 49.

Later, Alzarri Joseph cleaned up Shivan Dube for the second ball duck and then skipper MS Dhoni came out to join Jagadeeshan.

In the final over, Shami scalped his second as he sent Dhoni back to the hut for seven.

CSK could score 5 runs in the last over, taking its tally to 133 runs in the stipulated 20 overs.

For CSK, pacer Shami took two wickets, while Rashid Khan, Alzarri Joseph and Sai Kishore got one wicket each. It was CSK's ninth defeat in this session. Dhoni-led side still have one match in this season.