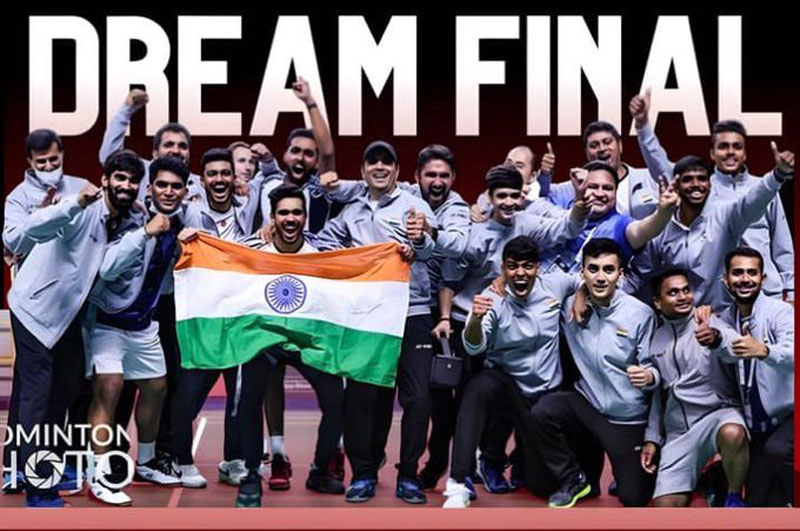 New Delhi: Minister for Youth Affairs and Sports Anurag Singh Thakur on Sunday announced an award of Rs 1 crore to Indian men’s badminton team which created history by winning the coveted Thomas Cup for the first time with a spectacular 3-0 victory over 14-time champion Indonesia in the final in Bangkok.

Anurag Singh Thakur celebrated the victory with a spontaneous decision.

As #TeamIndia defeats 14-time #ThomasCup Champions Indonesia (🇮🇳3-0🇮🇩) to win its 1️⃣st ever #ThomasCup2022, @IndiaSports is proud to announce a cash award of ₹ 1 crore for the team in relaxation of rules to acknowledge this unparalleled feat!

“India’s extraordinary feat of winning the Thomas Cup with successive victories over Malaysia, Denmark and Indonesia in the play-offs called for a relaxation of rules. It is with pride that I announce the award of Rs 1 crore to the team that brought  so much joy to the Indians this weekend,” he said.

The Minister complimented the players, coaches and support staff of the Indian team.

“Kidambi Srikanth and HS Prannoykept a clean slate by winning each time they stepped on court.The doubles combination of Satwiksairakj Rankireddy and Chirag Shetty raised the bar to win decisive points in five of the six matches, including all three in the knockout stage,” he said.

“Lakshya Sen showed nerves of steel in winning the opening match against Indonesia. I am sure that doubles combination of MR Arjun and DhruvKapila ad Krishna Prasad Garaga and Panjala Vishnuvardhan Goud as well as Priyanshu Rajawatwill have gained immensely by being part of this historic campaign,” Shri Anurag Singh Thakur said.

The Ministry of Youth Affairs and Sports contributed to the unprecedented success of the team by providing the players with training and competition support. A 10-week National Camp starting January helped raise fitness levels of the players.

The support to engage Mathias Boe as coach to assist the doubles combinations has been significant as well.

Over the past four years, the Ministry has extended funding worth Rs 67.19 crore to the Indian badminton players towards training and competition, including salaries of foreign and Indian coaches. And in the past year alone, the Ministry has supported as many as 14 international exposure trips at a cost of Rs 4.50 crore.