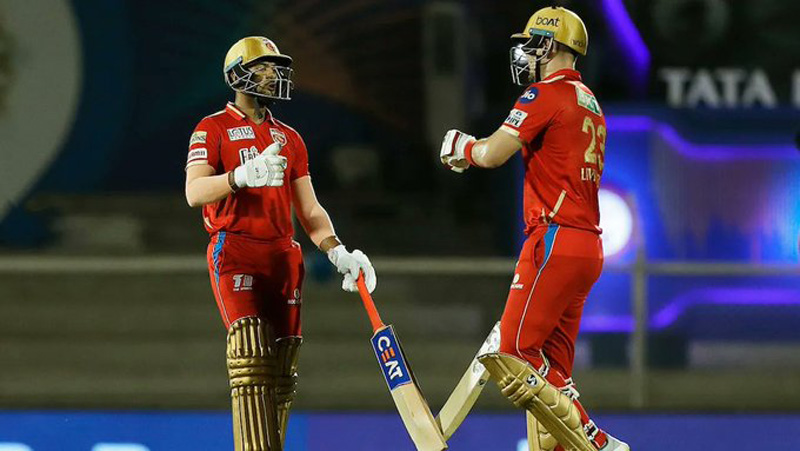 Scintillating innings by Liam Livingstone (70 off 42) and Jonny Bairstow (66 off 29) powered Kings to 209/9. In reply, Royal Challengers batted through the overs to protect their net run rate as they were restricted to 155/9.

Chasing the imposing 210-run target, Royal Challengers had a decent start but the things started to fall apart for them with the dismissal of openers Virat Kohli and Faf du Plessis in quick succession.

Kohli's batting woes in the 2022 IPL continued as Kagiso Rabada removed him for 20.

Soon, Rishi Dhawan struck and dismissed the dangerous Royal Challengers skipper du Plessis for 10. Rishi bagged another wicket as he got rid of Mahipal Lomror (6).

With Rajat Patidar and Glenn Maxwell in the middle, Royal Challengers were still in the game as the duo successful took the team out of the troubled waters.

However, Rahul Chahar broke the 64-run partnership as he removed Patidar for 26 in the 11th over.

The next over saw the dismissal of Maxwell (35). On a Harpreet Brar ball, the Australian was caught at long-off by Arshdeep Singh who emulated Shikhar Dhawan's thigh slap celebration and the domino effect extended to Harpreet who also celebrated in the same manner.

Soon, Arshdeep added his name to a wicket as he removed the 'finisher' Dinesh Karthik for 11. Rabada returned and collected two more wickets to rattle the lower order.

Earlier in the day, Bairstow played a quickfire knock to keep the Kings' dugout optimistic and Livingstone ensured a massive total for the side.

Kings got off to a flying start after being put into bat, with aggressive Bairstow and second-fiddle Shikhar stitching a solid 60-run opening partnership.

However in the fifth over, Maxwell got a breakthrough as he bowled Dhawan (21 off 15).

The Sri Lankan leg-spinner removed his compatriot Bhanuka Rajapaksa cheaply for one. The big moment in the match came in the 10th over, when Shahbaz Ahmed got rid of Bairstow.

The Englishman looked to go down the track but got a thick edge at backward point. A couple more dismissals, including skipper Mayank Agarwal (19), caused panic in the Kings' dugout.

However, another Englishman, Livingstone, took the onus and hammered Royal Challengers bowlers.

He cleared the boundary five times and tonked the ball for four sixes, thus making his teammates watching from the sidelines cheerful.

Harshal Patel removed the lower-order in quick succession, but the damage was already done by Livingstone. In the final over, however, Patel dismissed Livingstone who was caught behind.
(With UNI inputs)