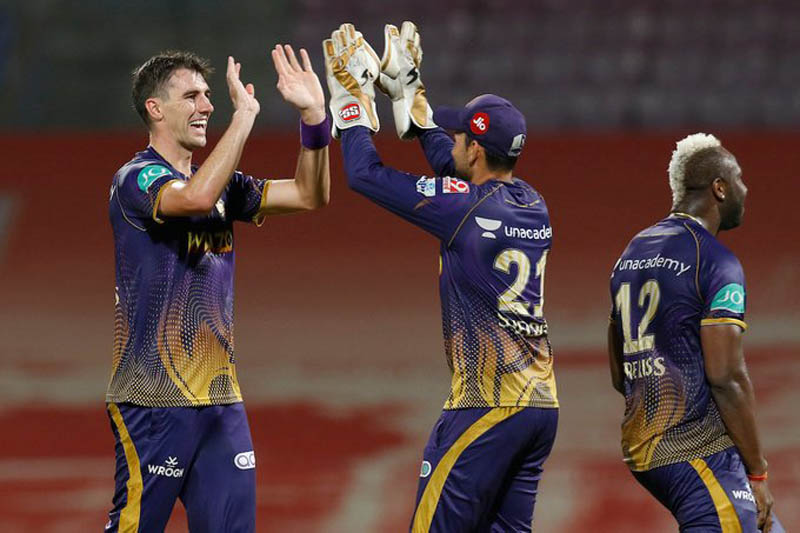 This win meant a lot, but not by much. They are 10 points ahead of Punjab Kings, Delhi Capitals and Sunrisers Hyderabad.

They still have two games left with a maximum of 14 points to reach.

They are fancying their chances based on other match results and better run rate.

Pat Cummins picked up 3 wickets in the 15th over to put KKR on top and from thereon MI never looked to come back in the match. With this defeat, they have slipped to their 9th loss in 11 games.

The 166 runs target by KKR looked chaseable at the innings break, but MI's out-of-the-wits batting lineup, in the absence of Surya Kumar Yadav, failed to maintain the tempo.

Once skipper Rohit Sharma and Tilak Varma departed, MI were forced to bring the innings back on track, which meant the onus was on Ishan Kishan and Ramandeep Singh.

Both failed to accelerate due to exceptional bowling by KKR on a lightly two-paced wicket, which Cummins and Andre Russel used to perfection.

At the end, the match finished in a mundane fashion. Cummins returned with 3/22, Russell with 2/22, while Tim Southee had 1/10 in 3 overs as Jasprit Bumrah's sensational 5/10 went in vain.

Chasing the target, MI lost two wickets within five overs. Rohit Sharma (2 off 6 balls) was given not out for a caught-behind appeal by Tim Southee, but on review it was overturned.

He didn't seem too pleased by the decision, but he had to walk back. Rohit was cramped by the angle and he was jumping to tuck it to leg.

Ball flew off the thigh pad and Sheldon Jackson took a good low catch diving to the right and was convinced there was an edge and asked the captain to review.

The replay made it evident that the spikes were caught before the ball touched the bat. There was one as it passed the bat and the third umpire didn't take long to make the call.

Russell got Tilak Varma (6 off 5 balls) inside the powerplay with an edge to slip as he tried to run the ball down to third man, but it cut back in to cramp him for room and took a thick edge towards Nitish Rana at slip who took it.

And Mumbai lost Ramandeep (12 off 16 balls) who came in for injured SKY (Suryakant Yadav) as Russel struck to put KKR on top. He was caught by Rana off a miscued pull shot at backward point. Tim David (13 off 9 balls) walked in and soon was on expressway.

He dispatched firt three balls for boundaries, but Varun Chakravarthy got him caught at deep midwicket by Ajinkya Rahane. Cummins picked up three wickets in his third over as MI slid to 102 for 7, losing Kishan, Daniel Sams and Murugan Ashwin.

It started with Kishan holing out immediately after getting to his half-ton. For the 4th time in five innings the Australian has dismissed the MI opener. Kumar Kartikeyan (3), Kieron Pollard (15 off 16) and Bumrah (0) were run out in search of cheeky runs.

Earlier, Bumrah's 5/10 helped MI restrict KKR to 165 for 9. Bumrah spun the story of the night by picking two wickets in the second over and three wickets in his next over, ending with an envious figures of 5/10 in stipulated four overs.

It all started with Russel's wicket and then ripped through KKR's lower middle-order with a flurry of short-pitched balls.

The premier MI bowler poured water on the plans of KKR to reach 200 runs mark, but finished a par below after their batsmen were mesmerised by his magnificent second spell.

KKR blooded Venkatesh Iyer at the top which paid rich dividends as he rebranded his last year's heroics.

After the departure of openers Venkatesh and Rahane, Nitish Rana was in a belligerent mood and threatened to snuff the game out of MI's reach.

But smart captaincy from Rohit to bring Bumrah back for his second spell proved to be a masterstroke. Put to bat after losing the toss, KKR made a steady start by putting on the highest opening stand of the season worth 50.

Kartikeyan tossed it up outside off, the ball spun away and Venkatesh top-edged as Daniel Sams at cover-point completed a safe catch. Kartikeya had his second wicket as Rahane (25 off 24 balls) was knocked over, leaving KKR at 87/2 in the 11th over.

The KKR batsman was beaten on the reverse sweep and bowled around his legs, putting an end to a decent knock but just when he had to accelerate he fell. Shreyas Iyer fell for just 6.

It was a superb delivery from Murugan Ashwin as he forced the KKR skipper forward to defend, but took a thin nick and Kishan made no mistake behind the stumps.

Bumrah, who was brought into the attack to forge a breakthrough, picked a brace in his second over and three more in his third. First he picked a big wicket of Russel (9 off 5 balls with 1 six).

The hard-hitting West Indian tried to take on the straight boundary, but the ball skied off the bat, and Pollard at long-on took an easy catch.

In the same over, Bumrah shouted for caught behind, but the on field umpire wasn't interested that prompted MI to review the decision and were rewarded. The MI bowler got Rana for 43 off 26 balls. A great catch from Sams in the deep had Sheldon Jackson (5 off 7 balls) walking back to the pavilion. Bumrah had his third wicket of the night in his next over.

He then got his next two wickets of Pat Cummins (0) and Sunil Narine (0) in the same over, ending with figures of 5 for 9 in three overs. KKR finished with 165, thanks to a cameo from Rinku Singh worth 23.