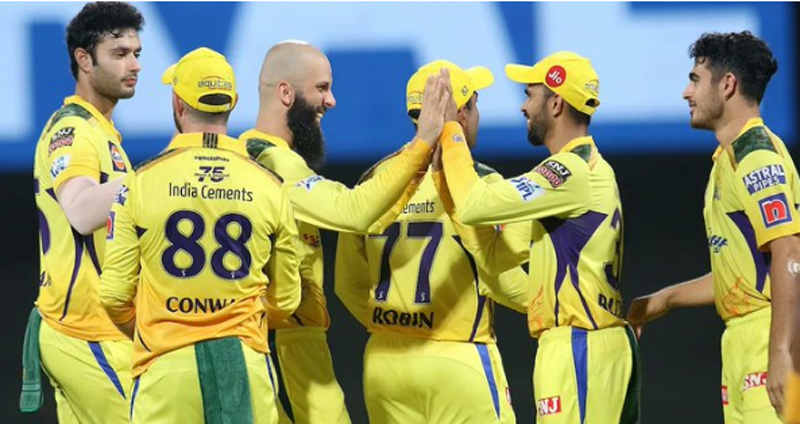 Mumbai: In a battle between mentor and disciple, the former prevailed as MS Dhoni's Chennai Super Kings defeated Rishabh Pant-led Delhi Capitals by 91 runs, the largest victory in the IPL 2022, here at the DY Patil Sports Academy on Sunday.

The Kiwi batter, who scored 85 no, 56 in his previous two outings, carried his form against Capitals and raced to his fifty off just 27 balls.

Conway along with his opening partner Ruturaj Gaikwad (41 off 33) maintained an average of 10 for Super Kings in the first 10 overs.

The team reached 100 for no loss at the half-way stage.

Conway especially hammered Kuldeep Yadav, first for two maximums and a four in the eighth over and then again in the 10th over for three consecutive boundaries.

The last 10 overs saw relatively slower start and the dismissal of Gaikwad. Capitals got the much-needed breakthrough in the 11th over.

On an Anrich Nortje bouncer, Gaikwad got late with his pull and ended up miscuing at midwicket.

The incoming Shivam Dube, who replaced an "unfit" Ravindra Jadeja in the lineup, joined Conway.

The duo saw off four overs with their brilliant running between the wickets before Dube, who was dropped on 14, whacked Shardul Thakur for two back-to-back sixes and finished the 16th over with a boundary.

Capitals breathed a sigh of relief in the 17th over as in the third ball Khaleel Ahmed got the crucial wicket of Conway.

On an offcutter, the Kiwi tried for a ramp but got an edge and keeper Pant dove to complete the formalities.

And Mitchell Marsh got the set batter Dube (32 off 19), who tried to go over long-off but got caught by David Warner stationed at the region.

Skipper Dhoni (21 no off 8) took the revenge for his openers with his finishing act. For Capitals, Nortje took three wickets, Khaleel and Marsh picked two and one respectively.

Chasing a mammoth target of 209, Capitals never really got off as they kept on losing wickets at regular intervals.

No batter could manage to cross the 30-run mark. After conceding two fours and then delivering a couple of dots in the second over, Simarjeet Singh dismissed Srikar Bharat (8) who pulled to slip.

Warner (19) and Marsh (25) tried to rebuild the innings but Maheesh Theekshana cut short Warner stay as the Australian was trapped leg-before.

Pant (21) straightaway got into his attacking mode, slapping three consecutive fours. Moeen once again put Capitals on the backfoot as he removed Marsh and Pant in quick succession.

While Marsh's slog went at long-on, Pant chopped on. Mukesh further rattled the middle-order, including the dangerous West Indian Rovman Powell for 3, and reduced Capitals to 82/6 after 10.1 overs.

With the asking run rate climbing and more than half of the side back in the dugout, Shardul, the lone hope, fell for 24 off the bowling of Dwayne Bravo.

For Super Kings, Moeen took three wickets, Mukesh, Bravo and Simarjeet got two each, and Maheesh claimed one.