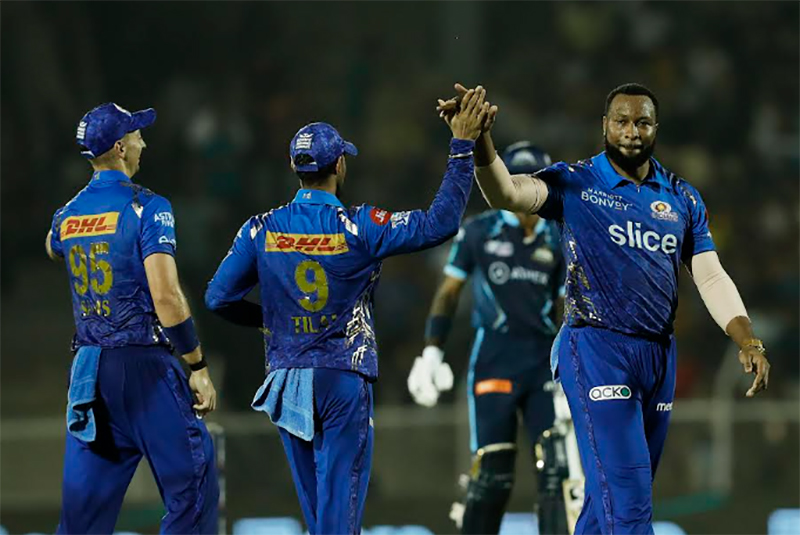 Nine runs were needed off the last over; Rahul Tewatia (3 off 4 balls) and David Miller (19 not out off 14 balls) were at the crease, and Rashid Khan to follow, the odds were stacked against MI. But Sams had a different plan.

The Australian pacer backed his slower balls and pulled off a thriller.

He bowled a slower ball from a short of a length and Miller slapped the cut to sweeper cover for a single. Sams hurled the second ball still slower, but this time near the tramline as Tewatia reached out for a cut and missed and had a look at the umpire, who did not signal in his favour.

Once again, the Australian pacer delivered a slower ball to Tewatia who pulled it to mid-wicket and called for two straightaway.

Tilak Varma in the deep ran forward and quickly released an inaccurate throw, but wicket-keeper Ishan Kishan did well to collect in front of the wickets and broke it swiftly.

Tewatia was just short of the crease. Sams conceded a single to Rashid on his fourth ball, bringing the dangerous Miller back on strike.

The South African crouched low to swing his bat and missed the ball hurled around the tramline outside off. Sams did it again, sending the spectators going berserk.

It was a dipping low full toss outside off on which Miller shaped up to hoick across the line, but failed to connect the ball, forcing MI skipper Rohit Sharma punching the air in delight as his team won.

Chasing 178, GT's openers got their team off to a perfect start.

Wriddhiman Saha (55 off 40 balls) was the aggressor in the first five overs and he did not even spare India's spearhead Jasprit Bumrah.

Shubman Gill (52 off 32 balls), who was happy to play second fiddle, played aggressively in the next five overs.

The openers knocked up their half-centuries and were cruising. But, Murugan Ashwin (2/29) snuffed out GT chase in a span of just six balls in the 13th over. GT were in the race, but for a couple of amatuer blunders from the batters. Sai Sudharsan (14 off 11) was out in an outlandish fashion.

His bottom hand came off the bat handle, but he kept pivoting.

He was off-balance as well and disturbed the timbers with his bat. GT skipper Hardik Pandya (24 off 14 balls) did not dive and was run out.

GT needed 11 against Lucknow Super Giants, 19 against Punjab Kings, 13 against Chennai Super Kings, 22 against Sunrisers Hyderabad and 7 against Royal Challengers Bangalore, but they could not score 9 against Mumbai Indians.

MI captain Rohit (43 off 28 balls) and Ishan Kishan (45 off 29 balls) started off with a bang as 200 looked a very possible total, but GT bowlers did really well, especially Rashid who once again shone with his googlies and leg spin. Rohit looked like a batter possessed as he got off to a flier in the powerplay, but Rashid sent him back out leg before to snuff out MI's dreams to touch 200-run mark.

After Rohit's departure, MI lost their way in the middle as soft dismissals of Surya Kumar Yadav for 13 off 11 balls and Ishan pinned down the rate. Rashid prowled back to bowl a remarkable over to dismiss big-hitting Kieron Pollard (4 off 14 balls), but David set the seal on getting MI a par total on this pitch with his 21-ball 44.

MI scored 63/0 in the powerplay; 57 runs by losing four wickets and as many runs in death overs, losing two wickets.

GT won the toss and elected to field. Rohit was in sublime touch as he took the attack to GT pacers early on a familiar Brabourne surface where the ball was coming on to the bat nicely.

The MI skipper brought up the half-century stand along with Ishan off 30 balls.

Rohit, however, did the bulk of the scoring, while Ishan made 15 off 10 balls.

Just when it seemed that MI had a chance to make big strides, GT scalped three quick wickets.

He had put on 74 runs for the first wicket.

Ishan looked all set for a big one, but was undone by a slower delivery from Alzarri Joseph.

The southpaw got an edge on Rashid. Pollard's stay came to an end as he was undone by Rashid's back-of-the-hand leg break.

The mighty West Indian looked to play a googly, he got beaten on the outside edge and was bowled, leaving MI 119/4 in 14.5 overs.

Tilak Varma was dismissed, runout for the third time in this IPL season.