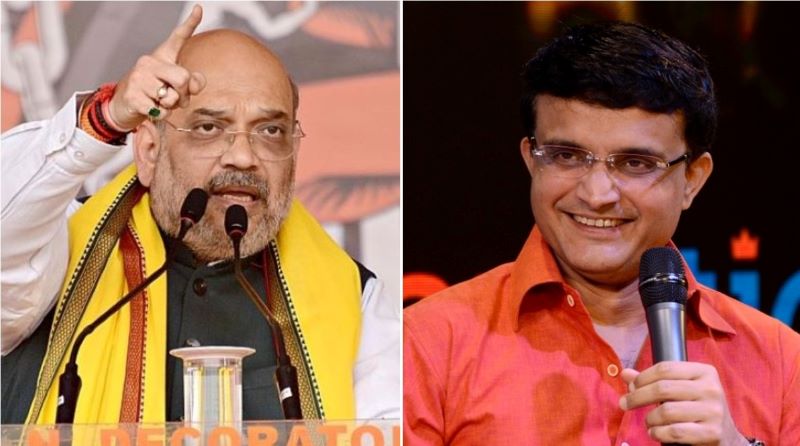 Shah, who is on a hectic tour of West Bengal since Thursday morning, would visit Ganguly's ancestral home at Sir Biren Roy Road in Behala and may dine a vegetarian dish along with Ganguly's family members.

"Yes we have known each other (Amit Shah) since 2008 but meeting him was rare because most of the time I had been out of the country for my cricket game," the Board of Control for Cricket in India (BCCI) president told a private TV channel.

Ganguly said he also works with his son Jay Shah. Jay Shah is the secretary of the BCCI.

Amit Shah is scheduled to attend a cultural programme at the iconic Victoria Memorial at 6 pm where Ganguly's wife, Dona Ganguly, is expected to perform with her troupe.

From there the union home minister may go to Ganguly's ancestral home at Sir Biren Roy Road in Behala around 7 pm.

Shah is now at New Town in eastern part of the city where in a hotel the former BJP national president was addressing party's senior leaders and karyakartas.

Reacting to the media report West Bengal Chief Minister Mamata Banerjee, when asked, said on Thursday that anyone can visit Sourav Ganguly's house.

She also suggested that Sourav Ganguly should also treat the visiting dignitary with Rossogolla and Dai (sweet curd) which is a very popular and famous sweet dish of Bengal.

"Yes Didi suggested the right thing because she is Bengali," Ganguly said.

Regarding the menu of the food for the guest, Ganguly said he would know only when he goes back home from work.

"I know he (Amit Shah) is vegetarian," Ganguly added.