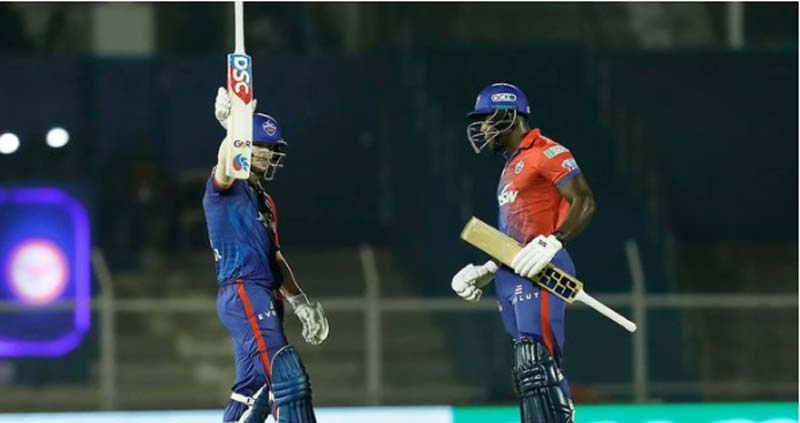 Mumbai: Delhi Capitals (DC) moved to fifth position on the points table of the IPL 2022 after defeating Sunrisers Hyderabad (SRH) by 21 runs here at the Brabourne Stadium on Thursday.

Shreyas Gopal's twin boundaries and a four by Kartik Tyagi made it - 27 required off the final over.

However, Kuldeep Yadav's experience came in handy to down the Sunrisers.

The dangerous opener Abhishek Sharma (7) was the first one to fall and his skipper Kane Williamson (4) followed him back to the dugout.

Rahul Tripathi (22) and Aiden Markram (42 off 25) tried to rebuild the innings for Sunrisers but Capitals continued to make inroads.

The onus then shifted on the shoulders of Pooran, who saw wickets falling at the other end but continued to put in hard yards.

Shardul finally ended Pooran's innings, which saw six maximums and two boundaries, in the 18th over.

Earlier in the day, Warner, who had an unceremonious exit from his former team Sunrisers, carried his bat throughout the innings which was studded with 12 fours and three maximums.

Bhuvneshwar Kumar caused early damage as the senior bowler removed Mandeep for a five-ball duck in the very first over of the innings.

Soon, Sunrisers debutant Sean Abbott got the better of his compatriot Mitchell Marsh (10).

Sunrisers were all over Capitals in the first 15 overs as Pant-led team were on 137/3.

However, the wind changed its direction in the last five overs.

Bhuvneshwar, who had conceded just one run and picked one wicket in his two overs including a maiden, finished with 1/25 in four overs.

Umran Malik (0/52) was the most expensive bowlers for Sunrisers, thanks to Warner and Powell who collected 70 runs in the final five overs.