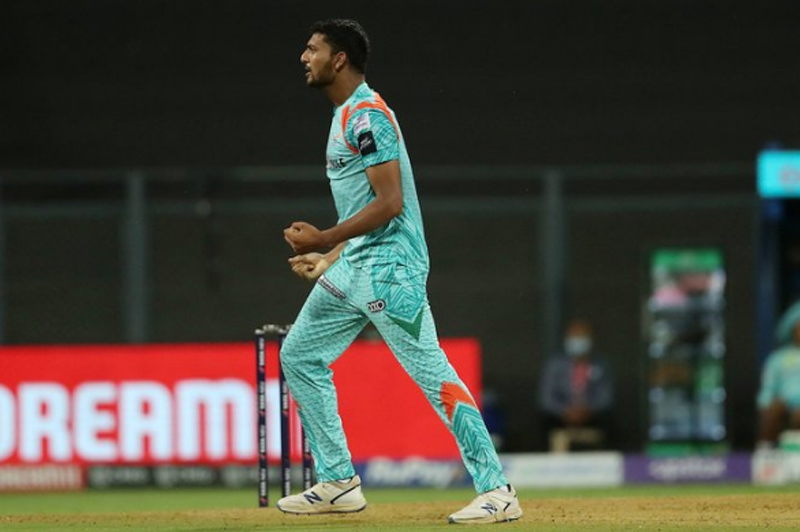 Mohsin claimed the crucial wickets of David Warner, Rishabh Pant, Rovman Powell and Shardul Thakur. Rahul (77 off 51) and Hooda (52 off 34) set a strong base, helping Super Giants to post a huge total of 195/3 against Capitals.

In reply, DC scored 189/7 and fell six runs short to go over the line. Chasing the 196-run target, DC lost Prithvi Shaw (5) early in the powerplay.

He pulled Dushmantha Chameera's length ball but got a top edge which landed comfortably into hands of Krishnappa Gowtham.

Mohsin trapped the big fish David Warner cheaply for three in the third over and DC were reduced to 13/2.

Skipper Pant and Mitchell Marsh turned the shaky start into fiery one with their 53-run partnership off 18 balls in the powerplay and DC reached 66/2 in six overs.

Gowtham dismissed dangerous Marsh (32) and broke the 60-run stand for the fourth wicket in the eighth over.

In the next over, Ravi Bishnoi bowled Lalit Yadav for a mere score of three.

Then, Pant and Powell shifted the momentum into DC's favour with their big hits and stitched a handy 35-run partnership for the fifth wicket.

However, in the 13th over Mohsin struck again and bowled set batter Pant for 44. Powell (35 off 21) was posing threat for LSG but Mohsin ended his stay at the crease in the 17th over.

In the same over, he also sent Thakur packing cheaply for one to get his fourth and made the task difficult for DC. Axar Patel (42 not out) and Kuldeep Yadav (16 not out) tried hard to pull off the chase but fell short of six runs towards the end. DC needed 21 off the final over, which Marcus Stoinis successfully defended to deny DC a win.

For LSG, Chameera, Bishnoi and Gowtham picked one wicket each.

Earlier in the day, Super Giants had a fine start after opting to bat first as they posted 57/1 in the powerplay. Quinton de Kock (23) was sent packing by Thakur in the fifth over as he sliced the length ball in the air with the bottom of the bat and Lalit took a safe catch.

After a decent start, skipper Rahul and Hooda started punishing DC bowlers. In the 13th over, the captain brought up his second fifty of the season off 35 balls.

In the very next over, Hooda completed his third half-century of IPL 2022.

The duo established a 95-run partnership off 61 deliveries, which Thakur by removing Hooda who tried to drive and hit straight but ended up handing a return catch to Thakur. In the penultimate over, Thakur got his third as he dismissed Rahul who looked to slash it away over the fielder on the rope but Lalit jumped to take a brilliant catch. With 15 runs off the final over, LSG set 196-run target for DC.