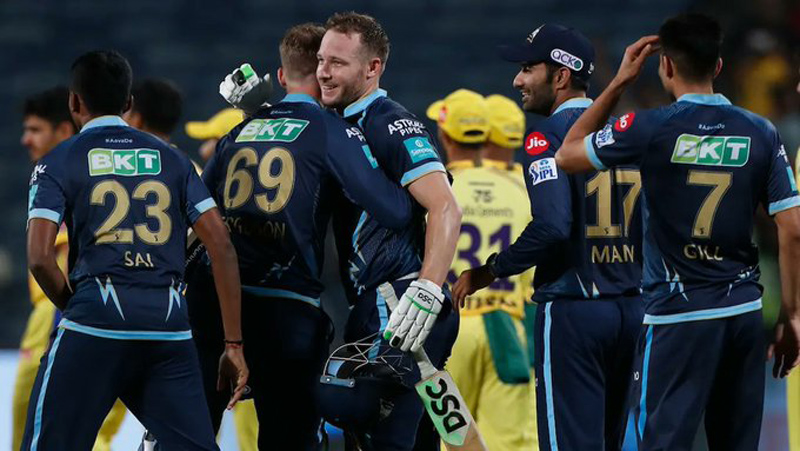 Mumbai: David Miller's 94 not out off 51 and Rashid Khan's quick-fire 40 off 21 powered Gujarat Titans (GT) to a three-wicket win against Chennai Super Kings (CSK) in an Indian Premier League (IPL) match here at the MCA Stadium on Sunday.

In spite of regular skipper Hardik Pandya's unavailability due to stiffness in the groin area and an early wobble while chasing 170 runs, Miller and stand-in captain Rashid proved too much for CSK to handle.

Ruturaj Gaikwad, who struggled in his previous five outings, roared back in form with his 48-ball 73.

In reply, GT opener Shubman Gill was dismissed for a golden duck and soon Vijay Shankar (0) and Abhinav Manohar (12) returned to dugout, leaving GT to 16/3.

It was Miller who took the onus and batted with full responsibility. The South African found the much-needed support from Rashid at the other end.

Rashid brought down the required run rate as he clobbered Chris Jordan (0/58), the most expensive CSK bowler, for three sixes and one four in the 18th over.

Although Dwayne Bravo got rid of Rashid in the penultimate over, the damage was already done.

With 13 runs needed off the final over, Jordan was handed the ball and as expected he was punished for a six by Miller.

CSK thought they had got Miller but the umpire signalled a no-ball.

As a result, Miller slapped Jordan for a boundary and on the second last ball ran for a double to take GT home.

Earlier in the day, CSK lost two wickets in quick succession after being put into bat.

Fast bowler Mohammed Shami made early inroads as he trapped Robin Uthappa cheaply for three. GT debutant Alzarri Joseph then cleaned up Moeen Ali for a mere one, reducing CSK to 32/2.

Gaikwad and Rayudu got into rebuilding act with their aggressive approach.

The duo kept on taking GT bowlers to the cleaners. Joseph returned only to deny Rayudu a well-deserved fifty. Yash Dayal then got the crucial wicket of Gaikwad as he hit straight to deep-backward square leg where Manohar made no mistake. Shivam Dube, who survived on 2 thanks to a review, along with his skipper Ravindra Jadeja added 38 runs towards the end. While Dube (19) hit two boundaries, Jadeja (22 not out) smashed two maximums. For GT, Lockie Ferguson (0/46) and Dayal (1/40) conceded the most runs.