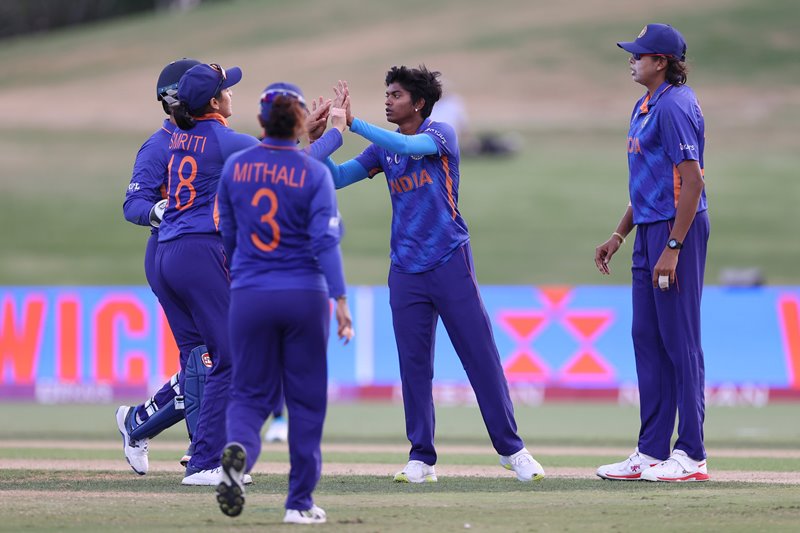 Yastika Bhatia’s half-century was the standout knock in India’s 229 for seven, though Ritu Moni’s three for 37 – including two in two balls – gave Bangladesh hopes of a famous win.

But Sneh Rana (four for 30) and Rajeshwari Gayakwad (one for 15 from 10 overs) left the Tigresses in a spin and they never recovered from a slow start despite the best efforts of Salma Khatun, who made a brisk 32.

Both sides made changes having been beaten last time out, India bringing in leg-spinner Poonam Yadav for seam bowler Meghna Singh while Bangladesh replaced Shamima Sultana and Fariha Trisna with Murshida Khatun and Lata Mondal.

Mithali Raj opted to bat upon winning the toss and India made a strong start, Smriti Mandhana getting the scoreboard moving with back-to-back boundaries to conclude the second over.

Her opening partner Shafali Verma went one better in the ninth, striking Nahida Akter for what would turn out to be the only six of the innings over long-on, and three boundaries in the following over saw India end the power play well set on 52 without loss.

Bangladesh needed a breakthrough and Nahida provided it when Mandhana picked out Fargana Hoque at square leg to fall for 30 and end the opening partnership on 74.

One became three in the blink of an eye, Ritu Moni accounting for Verma and Raj in consecutive deliveries in the next over as a jubilant Bangladesh checked India’s momentum.

Yastika Bhatia and Harmanpreet Kaur were tasked with the rebuilding job and it was one they set about cautiously, the pair content to rotate the strike as the Bangladesh attack kept boundaries to a minimum.

Just two arrived between the fall of Raj in the 16th over and midway through the 30th, a spell which also included the departure of Kaur for 14 courtesy of a direct hit from Fargana at mid-on.

Richa Ghosh joined Bhatia and was quickly up and running with successive fours through point, though the cut shot would later bring her downfall.

Ghosh survived being dropped off Ritu but it was not a costly miss as she did not add to her score of 26 before falling to Nahida in the next over, Nigar Sultana making amends behind the stumps.

Bhatia brought up a patient 79-ball half-century but fell to the next delivery, leaving India 176 for six at the start of the 44th over, but useful late cameos from Pooja Vastrakar (30 not out) and Sneh Rana (27 from 23) pushed them above 200.

Sharmin Akhter was caught at slip attempting a booming off-drive off Gayakwad before Fargana was trapped in front by a full Vastrakar delivery without scoring.

Bangladesh were 19 for two at the 10-over mark, the lowest score after the powerplay in the tournament so far, and the mountain they had to climb became steeper when captain Nigar holed out attempting to increase the run rate.

Murshida, dropped twice, saw her luck run out when she was smartly taken by Kaur off Yadav for 19 and it was 35 for five when a successful review showed the ball had flicked Rumana Ahmed’s glove en route to Bhatia at short leg, handing Rana a second wicket in her miserly opening spell.

Salma provided a glimmer of light for Bangladesh, hitting four boundaries in her 32 before edging Jhulan Goswami behind to all but seal her side’s fate.

There was still time for both Vastrakar and Rana to move level at the top of the wicket-takers list for the tournament, each bowler claiming their 10th scalp as India wrapped up a convincing victory to leave Bangladesh on the brink of elimination.