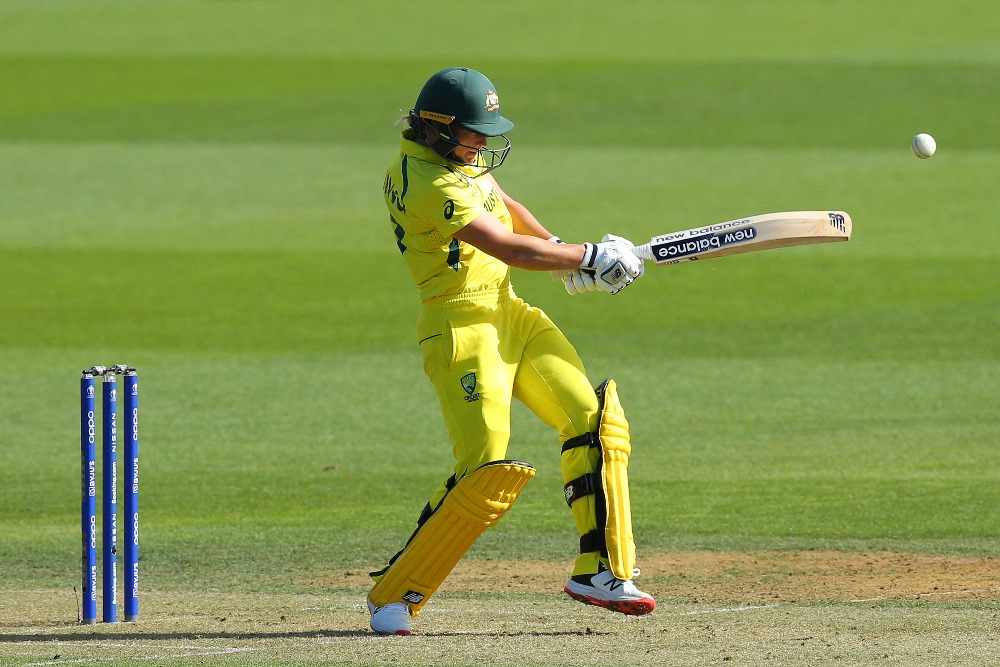 Meg Lanning’s 135 not out led her Australian side to a five-wicket win over South Africa, continuing their unbeaten run at the ICC Women’s Cricket World Cup 2022 while ending the Proteas’.

Laura Wolvaardt fell short of a century of her own but made a fine 90 as South Africa set Australia a challenging 272 to win in Wellington.

But South Africa had no match for an imperious Lanning as she steered Australia to a dominant victory which ensured they would finish no lower than second.

Having been put in to bat, Wolvaardt and Lizelle Lee reached 88 runs for South Africa’s highest opening partnership of the tournament before Lee fell LBW to Alana King for 36 from 44 balls.

Lara Goodall, who came into the side for a struggling Tazmin Brits, timed the ball well but could make only 15 before she provided King with a routine catch off the bowling of Annabel Sutherland.

Luus would fall not long after, Tahlia McGrath taking her second catch of the day - this one much simpler than the catch to dismiss Wolvaardt to send Luus back to the pavilion following a well-made 52 from 51 balls.

Losing their two set batters saw South Africa slip to 216 for four and Mignon du Preez was given another chance to get some runs in the tournament, having made just 27 across the Proteas’ previous four matches.

She could add only 14 to the total but her dismissal was not entirely her fault, du Preez joining the Australians in having a smile on her face – though hers was a wry one – as Gardner plucked the ball out of the sky at full stretch, stopping what looked to be a six to reduce South Africa to 228 for five.

Marizanne Kapp and Chloe Tryon added valuable runs at the death, Kapp finishing on 30 not out from 21 and Tryon hitting Megan Schutt for the only six of the innings as the Proteas finished strongly.

Australia began their chase of 272 similarly positively, taking 14 off the first two overs before Alyssa Healy was caught behind by Trisha Chetty off the bowling of a roaring Shabnim Ismail for one.

That brought Lanning to the crease and she and vice-captain Rachael Haynes put Australia in a strong position at 45 for one after the powerplay.

Haynes then departed for 17 from 29, du Preez getting her own back by taking a stunning catch in full flight to hand Tryon an unlikely first wicket.

Ellyse Perry did not come out to bat at four, her departure from the field with a back injury meaning she could come in no higher than seven, but the equally able Beth Mooney took her place.

Lanning was typically ruthless in her pursuit of leading her side to victory, taking on World Cup debutant Tumi Sekhukhune as she brought up 52 from 57 balls.

Sekhukhune made amends in the field, producing a direct hit to dismiss Mooney for 21 and reduce Australia to 114 for three after 20 overs.

Lanning had let a hundred pass her by against India, falling for 97, but she was not to be denied on this occasion and brought up her 15th ODI century with a four off Ayabonga Khaka, strengthening her grip on the most hundreds in women’s ODIs.

After twice being dropped, McGrath was finally caught by Kapp for 32 from 35 balls to calm a seething Ismail.

Gardner would then depart for 22 as Tryon got a second wicket but Australia were always comfortable at 241 for five with 10 overs remaining.

Lanning was there at the end on 135 not out from 130 balls and Sutherland hit the winning runs to earn Australia’s sixth win in as many games.