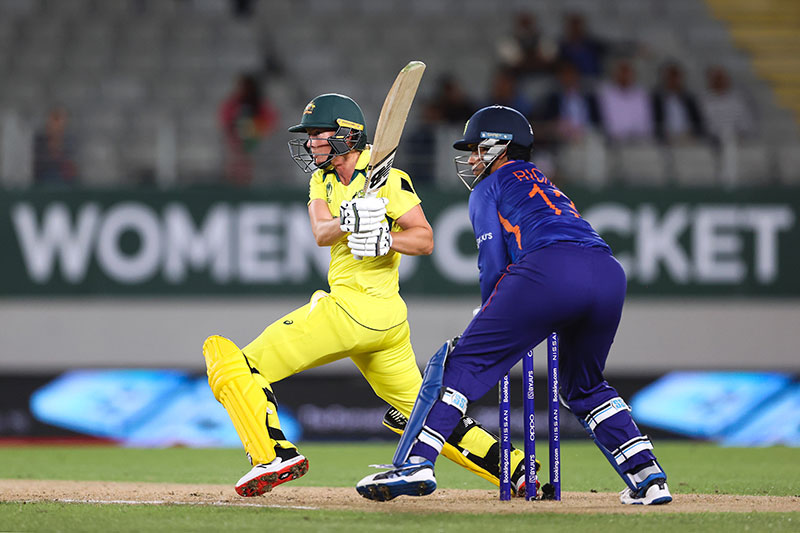 Auckland/UNI: Twin hundred-plus partnerships by the top-order batters helped Australia beat India by 6 wickets in a league match of the Women's Cricket World Cup 2022 at the Eden Park here on Saturday.

With the defeat, India now find themselves in a perilous position battling England and New Zealand for a spot in the top four.

Meanwhile, Australia became the first team to qualify for the semifinals.

The opening pair of Alyssa Healy (72) and Rachael Haynes (43) put Australia in a commanding position, adding 121 runs together in their 278-run record chase.

Healy set the tone for Australia, smashing five boundaries in the first five overs to get the Down Under side off to a flying start.

Haynes, who was mostly playing the second fiddle in the early exchanges, wasn't to be left far behind as she too got in on the act, finishing the powerplay at a run-a-ball 25.

Australia kept on cruising, with India missing out on some run-out chances.

While Healy slowed down and got to her 15th ODI fifty, India, who were desperate for wickets, lost both their reviews in consecutive overs to lbw decisions.

The duo brought up their first 100-run opening stand in the tournament.

However, Sneh Rana finally got the much-needed breakthrough.

A reverse sweep off Rana went straight into the hands of Mithali Raj at short third. One wicket brought another one as Pooja Vastrakar's short-ball hurried Haynes, edging the ball to the gloves of Richa Ghosh.

Australia, who are known to bat deep, quickly build another 100-plus partnership, with skipper Meg Lanning and Ellyse Perry. The match was interrupted due to rain, with Australia (225/2 after 41 overs) ahead of DLS by 28 runs.

However, cover came off with no overs lost. After resumption, Vastrakar struck with a full-toss outside off as Perry (28) hit straight to covers, where Raj made no mistake.

With 11 needed off the last two overs, Meghna Singh gave India a slim hope as she got rid of Lanning for 97.

Raj (68) and Bhatia (59) paced the Indian innings through the middle overs, recording the third highest stand against Australia in the World Cups.

Harmanpreet (57 not out) and Pooja Vastrakar (34) then put the finishing touches as they added 64 runs towards the end.

After being sent into bat first, India suffered twin blows as teenage quick Darcie Brown, who returned with the figures of 3/30, reduced India to 28/2 after 6 overs.

Brown had star India opener Smriti Mandhana (10) caught at slip by Meg Lanning in the fourth over, before Beth Mooney pulled down a contender for catch of the tournament when she held on to a difficult chance at gully to send Shafali Verma (12) packing.

Raj and Bhatia put India back on track with their brilliant strike rotation and regular boundaries, including one maximum by the India skipper.

Brown returned to remove Bhatia and soon Alana King got rid of Raj to dry up the runs.

Australia fought back hard and India lost a couple of wickets in quick succession before Harmanpreet and Vastrakar took India to a challenging total.