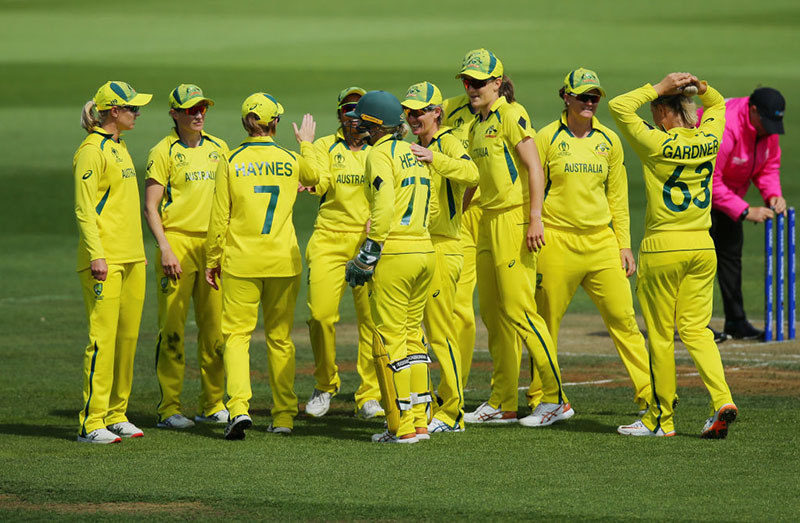 Australia continued their imperious form at the ICC Women’s Cricket World Cup 2022 with a seven-wicket win over the West Indies in Wellington on Tuesday.

The West Indies were bundled out for 131 as Ellyse Perry and Ashleigh Gardner took three wickets each, with captain Stafanie Taylor’s fifty the bright spot of the innings for the West Indies.

Two early wickets brought the Windies back into the game before a masterful 83 not out from Rachael Haynes steered the undefeated Australia home for their fourth win from four matches.

Perry opened the bowling after the Windies chose to bat and picked up where she left off against New Zealand, dismissing Hayley Matthews, then the leading run-scorer in the competition, for a four-ball duck before Kycia Knight went the very next ball to leave the West Indies on four for two.

Before the powerplay had even been completed, Perry had another scalp and it was the dangerous Deandra Dottin.

The all-rounder had recovered from a back issue that hampered her in the loss against India but could only make 16 as she was caught by a diving Meg Lanning at slip.

By the time Perry had completed her eight-over spell, she had produced impressive figures of three for 22 but was unable to break the building partnership between Taylor and Shemaine Campbelle.

Campbelle was eventually dismissed for 20 from 51 balls as Gardner claimed her first wicket of the day, with the all-rounder miscuing straight to midwicket as Beth Mooney took the catch. Gardner had her second before the 23rd over as she bowled Chedean Nation for the third duck of the innings.

Taylor continued to provide resistance – despite runs being hard to come by against a disciplined bowling attack - but she found herself in need of a partner as Chinelle Henry and Aaliyah Alleyne both fell for 10.

Henry went searching for a needless third run and was punished, with Alana King’s good running in the deep matched by Alyssa Healy’s expert glovework.

Alleyne was then expertly caught by Annabel Sutherland for Megan Schutt’s first wicket and her second maiden of the day.

Taylor edged her way to her half-century – her 37th ODI fifty – hitting three fours before a drive to cover brought up the milestone with a two.

But she was unable to add another run to the West Indies total as Gardner earned her third wicket, a review unable to save Taylor from the leg-before wicket call as she went for 50 from 91 balls.

Gardner’s fine performance came to an end with ODI-best figures of three for 25 from her 10 overs, before Jess Jonassen got in on the wicket-taking, dismissing Shakera Selman for six – the off-spinner deceiving her with pace on the ball.

As their defence of the under-par total began, the West Indies needed quick wickets and they got them as Healy had to go for three as Matthews took a caught and bowled.

Matthews was the catcher too as Lanning went for a six-ball duck before Perry joined Haynes in playing a patient innings, with just 2.67 runs per over needed.

Henry was the bowler to break the 51-run partnership and it was Matthews taking the catch again as Perry departed for 10 having edged to slip for one of Matthews’s simpler takes.

At the end of the 17th over the two sides were neck and neck on 59 for three but Haynes steered Australia away from the battling West Indies.

Her second half-century of the tournament came up with a four to deep backward square, as she and Mooney rotated the strike consistently.

With only half the innings gone, Australia needed just 32 runs to win and the West Indies’ day got worse as Shamilia Connell hobbled off after injuring her hip while fielding.

Haynes would get the winning runs to end on 83 not out as Australia chased down 132 with 118 balls to spare.