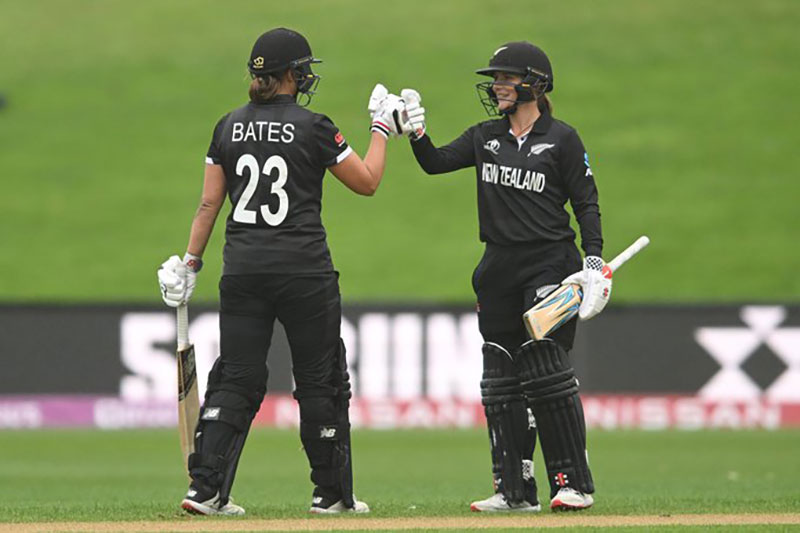 Suzie Bates blasted 79 not out on her home ground of Dunedin as New Zealand earned a nine-wicket victory over Bangladesh in the ICC Women’s Cricket World Cup 2022.

Bates also passed 1,000 World Cup runs in a 108-run partnership with Amelia Kerr as the White Ferns chased down 141 in a rain-reduced match on the South Island.

Bangladesh reached 140 for eight from 27 overs after a long delay, but New Zealand were always on top of the chase, knocking off the runs in exactly 20 overs to earn their first win of the home World Cup.

Bangladesh were put into bowl by New Zealand after a rain delay that lasted four hours but made a bright start.

Lea Tahuhu and Jess Kerr were not able to find their lengths as anything short was dispatched for a boundary by openers Shamima Sultana and Fargana Hoque Pinky.

With the five-over power play complete, Bangladesh looked to be racing to a competitive total of 41 for no loss.

Amelia Kerr then came into the attack to try and show her older sister how it was done, going for four from her first over as Bangladesh brought up their fifty.

Prior to making their competition debut in New Zealand, Bangladesh had made just two opening stands of over 50 in their previous 41 ODIs and had not produced one in 28 games.

But Shamima contributed 30 from 28 with Pinky on 15 from 14 to bring up their second 50-plus opening stand in their first World Cup campaign.

However, the partnership would end on 59 as Frankie Mackay got the breakthrough on her first World Cup appearance since 2013.

Shamima was forced to go for 33 from 36 balls as a sliding Tahuhu took the catch at deep backward square.

That brought captain Nigar Sultana out to the middle and she hit the first boundary since the sixth over off the third delivery of the 13th.

But she would not last much longer as Amy Satterthwaite came on for her first over and had her caught behind by Dunedin native Katey Martin after Sultana slashed at a wide one.

Five balls later, veteran Rumana Ahmed was also heading back to the hutch having been bowled for one as Satterthwaite claimed two for two, the first time since 2016 she had taken two wickets in an over.

Bangladesh had slipped to 81 for three after 15 overs, their positive start undone by losing three for 21.

Satterthwaite’s next over produced no wickets but she kept the pressure on by only conceding three runs, Bangladesh running hard for each single.

Amelia Kerr conceded her first boundary in the 21st over, the first for seven overs, as Pinky moved patiently towards her fifty.

She would have to wait even longer to reach that milestone as Sobhana Mostary was forced to go for 13 from 21 when Maddy Green took a solid catch off the bowling of Hayley Jensen, to leave Bangladesh’s hopes of a big first innings total in the balance at 108 for four.

Pinky would eventually get her fifty from back-to-back twos, bringing up her eighth ODI half-century and crucially Bangladesh’s first in an ICC Women’s CWC from 60 balls.

Ritu Moni could not make her usual cameo departing for four from two balls as Sophie Devine pouched the catch that gave Amy Satterthwaite her 50th wicket in ODI cricket.

She joins an illustrious group to have made 3,000 runs and taken 50 wickets in one-day internationals, including the likes of Charlotte Edwards, Karen Rolton and Stafanie Taylor.

Mackay then did what she does best, affecting a quick run out as Pinky could not get back to the striker’s end in time, curtailing her excellent innings on 52.

The right-arm off-spinner got another run out when Salma Khatun was also caught short with Bates sending a low throw into Mackay who directed it onto the stumps at the bowler’s end.

An over later and the bails were dislodged again, this time Jahanara Alam was the batter run out by Amelia Kerr, going for a second run that was never on as Bangladesh ended on 140 for eight.

New Zealand’s start was a little more sedate even as the rain began to fall again, Sophie Devine facing the first over from Alam with Bates at the other end having walked out on her home ground.

Bates was able to have a giggle with Alam as the seamer pulled out of her run-up when she had already begun inching down the track ready for a big heave.

With the powerplay over, the White Ferns were behind Bangladesh at the same stage on 29-0 and then lost Devine as she rocked back and missed a swing at a Khatun delivery and was bowled for 16.

Out came Amelia Kerr and she and Bates steadied the run chase with the fifty-partnership coming up just after the halfway mark after a no ball.

A slow over was not what New Zealand wanted as the rain set in with 20 overs needed for a result to count, but then Bates started motoring.

Her fifty came up in the next over, a 12th ODI half-century brought up in 51 balls, and a first chance to raise the bat in a New Zealand jersey at her home ground.

She was still playing with fire and should have been gone on 58 but keeper Sultana couldn’t hold on to the wet ball to take the bails off with Bates way out of her ground.

With the first ball of the 19th over, Bates reached a remarkable milestone as her 75 runs took her past 1000 runs in Women’s Cricket World Cups, becoming only the second White Fern to do so after Debbie Hockley.

With New Zealand moving to 135 for one, it was only a matter of time before the win was sealed.

And it was Amelia Kerr who got them there, striking the ball for four to end on 47 not out, with Bates down the other end on an unbeaten 79 having shared a magnificent 108-partnership to earn New Zealand a first win at their home World Cup after losing a close match to the West Indies.