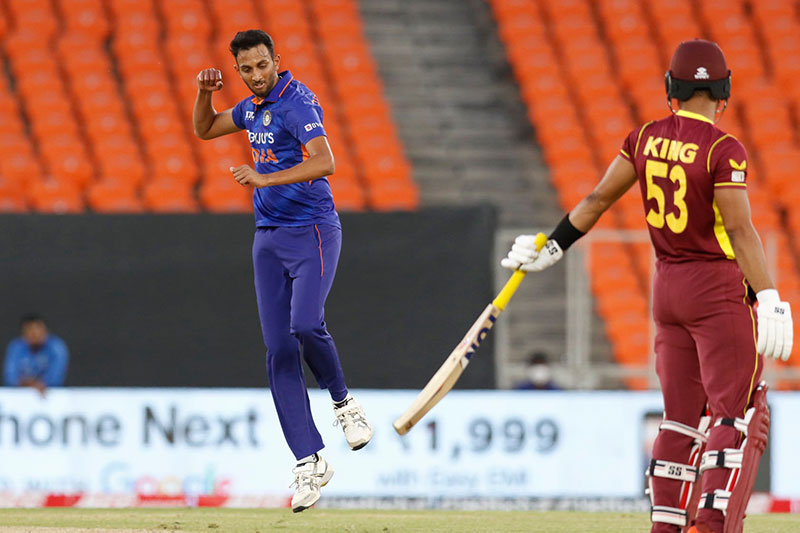 Ahmedabad/UNI: Pacer Prasidh Krishna's four-wicket haul after a brilliant knock of 64 from Suryakumar Yadav helped India defeated West Indies by 44 runs in the second ODI here at the Narendra Modi Stadium on Wednesday.

With the win, India have taken an unassailable 2-0 lead in the three-match series.

Prasidh got an early breakthrough while defending the 238-run target.

Brandon King (18) chased a wide delivery and nicked it back to wicket-keeper Rishabh Pant.

The pacer bagged another wicket as Darren Bravo (1) departed but not before a review.

The on-field umpire didn't give out but Prasidh convinced captain Rohit Sharma, who took his time before calling for a review.

The Ultra Edge showed a spike as the ball passed the bat, forcing the umpire to change his decision.

The spinner got the crucial wicket of Shai Hope (27).

The right-hander holed out to Suryakumar at long-on, leaving West Indies on 52/3 in 16.2 overs.

Prasidh along with Shardul Thakur further dented West Indies' chase, dismissing Nicholas Pooran (9), who captained the visitors as Kieron Pollard missed the match due to a niggle, and Jason Holder (2).

West Indies' last hope Akeal Hosein gave his all against the Indian attack but eventually fell for 34 off Thakur.

Towards the end, Odean Smith (24) challenged India but Washington Sundar finally got the better of Smith as he ended up giving a catch to Virat Kohli at deep midwicket.

Earlier, a 91-run partnership for the fourth wicket between Suryakumar and KL Rahul helped India post a total of 237/9 after being put in to bat.

In a surprising move, Rishabh joined Rohit to open the innings after being put into bat on a pitch that offered some bounce. The last time Rishabh walked in to open was during the 2016 Under-19 World Cup.

The plan backfired as Rohit (5) was caught behind after poking an outside the off stump delivery.

It was Kemar Roach who got the breakthrough. Odeon Smith got the better of Rishabh (18) and Virat (18), who was playing his 100th ODI match, in the space of just three deliveries, reducing India to 43/3 after 12 overs.

Suryakumar and Rahul found it difficult to settle in initially.

The duo slowly steadied India's ship, bringing up their 50-run stand off 83 balls.

However, just when their partnership was soaring, a mix-up resulted in Rahul's (49) departure. Rahul drove to the left of deep cover and set off for a second run.

Suryakumar responded well but Rahul stopped in the middle of pitch and lost the second run as well as his wicket.

Washington Sundar (24) and Deepak Hooda (29) chipped in towards the end.