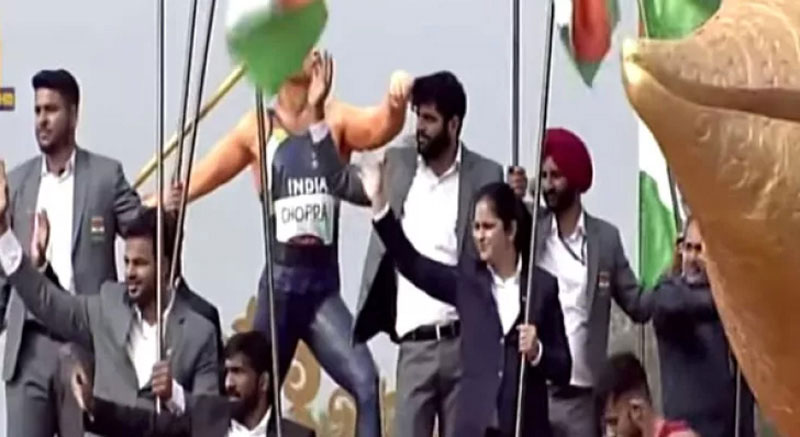 New Delhi/UNI: The tableau from Haryana at the 73rd Republic Day parade was inspired by the state's pride 'Number one in Sports' and it reflected the proactive policies of its government at promoting the culture of the sports.

The tableau was showcased in the form of "Victory Chariot" from the Mahabharat's Kurukshetra (also a region in the state).

The front of the tableau was the Conch of Lord Krishan, the wrestlers wrestling in the arena formed the middle and reflected Haryana's passion for sports.

The rear carried a replica of Olympic Gold medallist Neeraj Chopra. Chopra was seen in a javelin throwing position.

There were also replicas of participants and winners in the national and international outings.

The likes of Yogeshwar Dutt, world record holder and paralympics gold medallist Sumit Antil along with para archer Harvinder Singh, wrestler Deepak Punia and other were seen present in it.

In the Tokyo Olympics 2020, Haryana bagged four medals out of seven medals won by India, including the historic gold medal in individual category.

In Paralympics 2020, out of the total 19 medals won by the country, athletes from Haryana claimed 6 medals, including two gold medals in the individual category.