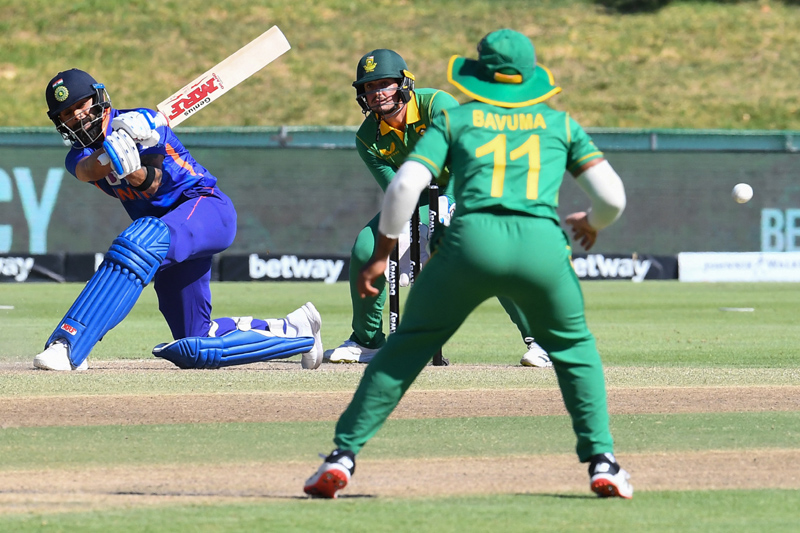 With the win, South Africa have taken an early lead 1-0 in the three-match series.

Chasing the target of 297, India had a decent start before suffering an early blow. Aiden Markram struck for South Africa as he dismissed India captain KL Rahul for 12. The right-hander poked an outside off delivery and got an edge which was collected by wicket-keeper Quinton de Kock.

Shikhar Dhawan and former captain Virat Kohli slowly steadied the visitors. The duo put up a 92-run stand for the second wicket before Keshav Maharaj bowled Dhawan for a well-made 79.

The left-hander, whose knock saw 10 boundaries, displayed his class and gave India the perfect start. It was 34th ODI fifty for the seasoned campaigner.

Kohli carried on and registered his half-century off 60 balls. The knock marked his 63rd fifty in the 50-over format. However, soon after his fifty, Kohli (51) was removed by Tabraiz Shamsi.

The right-hander, who looked in control, tried to go for a sweep but played it early and the ball went to midwicket, where Temba Bavuma caught him. After the departure of two set batters, the game turned in favour of South Africa inside 29 overs.

Shamsi returned and bagged his second wicket, with Bhuvneshwar Kumar (4) giving a sitter to Bavuma at short midwicket. Although the visitors had no chance to win the match, the India tailenders refused to give up.

Shardul Thakur finished unbeaten on fifty, which marked his maiden half-century in ODI format. However, it was not enough after the visitor's batting collapse and India were restricted to 265/8.

The duo stitched a solid 204-run partnership for the fourth wicket. While Bavuma eventually departed for 110 off 143 balls, Van der Dussen remained unbeaten on 129 off 96 deliveries.

The new ball man Jasprit Bumrah had a wayward start, conceding a wide and then four leg byes. The fast bowler finally managed to struck early for India as Malan (6) was caught behind.

Bumrah and Bhuvneshwar, for whom the series is important to cement his place in the 50-over squad, kept things tight for De Kock and Bavuma.

Ashwin, who was playing his first ODI since July 2017, missed a chance to strike in his first over. De Kock sliced the ball but Shreyas put him down at backward point.

The off-spinner finally got De Kock for 27. The wicketkeeper-batter looked to play a cut shot but got beaten and the ball knocked his off-stump.

Soon, a direct hit from debutant Venkatesh run out Markram for four. Bavuma and Van der Dussen slowly rebuild the innings and helped the hosts reach the 100-run mark after 23 overs.

The duo brought up their 50-run partnership off 46 balls on what looked like a difficult pitch to bat on. The South Africa skipper Bavuma registered his third ODI half-century along the way.

The batting partners soon reached their 100-run stand to ensure South Africa remain strong in the game. An overthrow took the hosts to 203/3 after 39 overs.

Bavuma raised his bat to welcome his second ODI ton off 133 balls. Soon, Van der Dussen, too, brought up his century off 83 balls.

Bumrah finally broke the partnership between the South Africans in the penultimate over as Bavuma holed out to long-on.