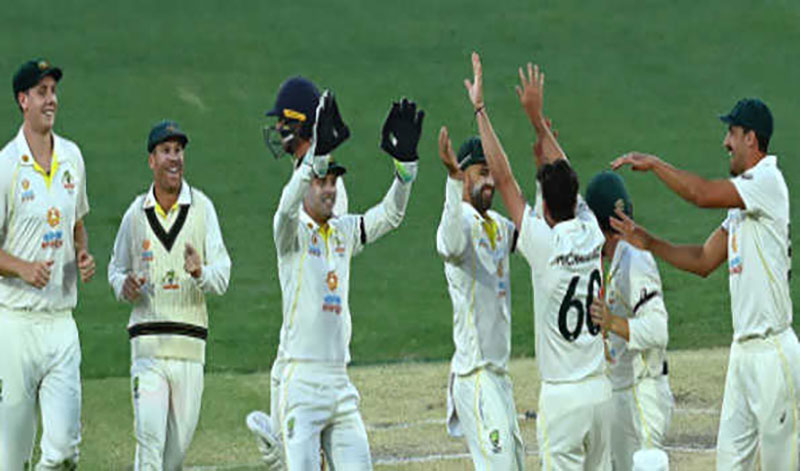 Adelaide/UNI: Jhye Richardson claimed a five-wicket haul as Australia defeated England by 275 runs in the second Ashes Test here at the Adelaide Oval on Monday.

The hosts Australia also extended their lead 2-0 in the five-match Test series.

While Australia needed 6 wickets to win, England required 386 runs on the fifth and final day of the second Test match. Mitchell Starc struck for Australia as the fast bowler dismissed Ollie Pope (4), who gave a catch to Steve Smith at slip.

Ben Stokes, who played a pivotal role in helping England draw the 2019 Ashes series, couldn't do much with the bat in Adelaide. The right-hander was leg-before off Nathan Lyon for 12. Jos Buttler and Chris Woakes stood tall before heading for dinner, with England at 142/6.

Soon after resumption, Jhye Richardson dismissed Woakes for a well-made 44. While Australia continued to bowl dot balls, Buttler and Ollie Robinson kept defending. Lyon returned and got rid of Robinson (8), leaving Buttler as the lone warrior in England's drowning ship.

Stuart Broad joined Buttler in the middle and duo continued to play defensive shots. England and Australia went into a 20-minute break, with Australia needing just two wickets to seal the match.

In the final session, Buttler's (26 off 207 balls) defiant knock ended in a heartbreaking fashion as the wicketkeeper-batter got out hit-wicket off Jhye Richardson.

Broad and James Anderson frustrated Australia for a couple of overs before Richardson dismissed Anderson and picked up his first five-fer.

Marnus Labuschagne was named Player of the Match for scoring 103 and 51 for Australia.