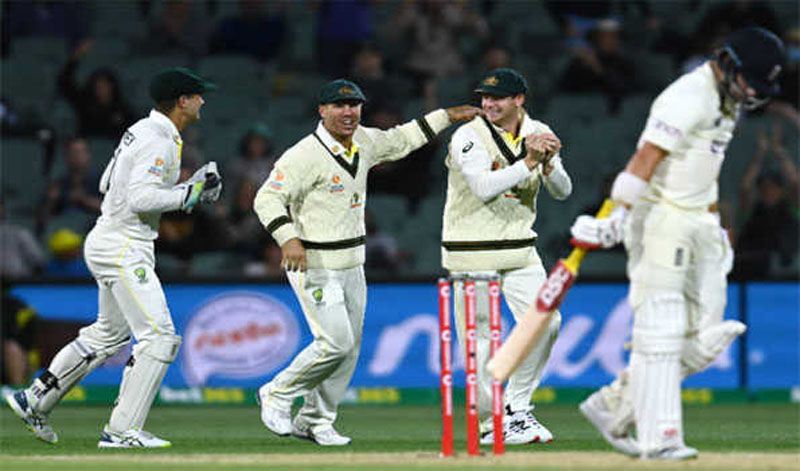 Adelaide/UNI: Australia reduced England to 82/4 at stumps on the fourth day of the second Ashes Test here at the Adelaide Oval on Sunday. As the visitors are trailing by 386 runs, the hosts need 6 wickets to win the match.

England captain Joe Root fell on the final ball of the day off Mitchell Starc. Root, who tried to defend, edged and was caught by wicket-keeper Alex Carey to his right for 24.

Chasing a target of 468 runs, England suffered an early blow as Jhye Richardson dismissed Haseeb Hameed for a duck. England, who were at 20/1, and Australia headed off the ground for a 20-minute break.

After resumption, England's dry spell continued. Soon Michael Neser struck for Australia as Dawid Malan got leg-before for 20, and Jhye Richardson got rid of Rory Burns (34).

Root and Ben Stokes tried to rebuild the innings but Starc got the better of Root which was no less than a dagger through the heart of England.

Earlier, Australia, who were at 48/1 on Day 3, declared on 230/9 on the fourth day. James Anderson bowled Michael Neser (3), while Stuart Broad got Marcus Harris caught behind for 23.

Australia stand-in skipper Steve Smith was dropped by wicket-keeper Jos Buttler on zero. When Buttler attempted to dive to his right, the ball hit his left glove and went past the gap between his arm and body.

Both Anderson and Broad kept things tight for Smith and Marnus Labuschagne. Soon, Ollie Robinson got the better of Smith (6) as this time Buttler didn't drop the catch. The teams headed off for dinner, with Australia leading with 371 runs.

Head and Labuschagne brought up their fifties before Robinson dismissed Head (51) and Labuschagne (51) fell to Dawid Malan in quick succession. Mitchell Starc contributed with 19 runs.